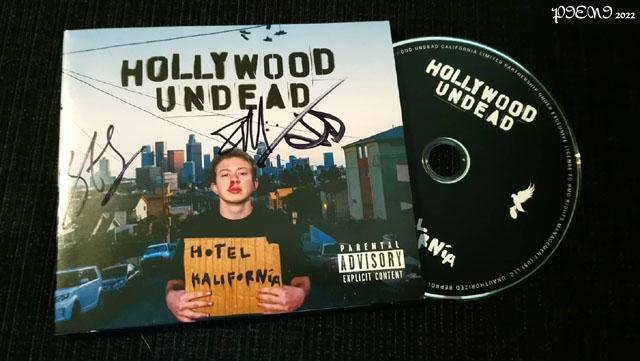 Every HOLLYWOOD UNDEAD record is a box of surprises. If you thought “CHAOS” meant “Hotel Kalifornia” would follow the heaviness of “New Empire – Vol. 1”, then “Wild In These Streets” came and delivered that hip hop vibe they’ve started with in “Swan Songs”. In the end, all 14 tracks fire up in every kind of direction – pretty much like their whole discography – but with a feeling of “more” to each trait.

The drum patterns are more vibrant (“CHAOS”, “Hour Glass”), the guitars and bass are rougher and more striking (“Reclaim”, “Dangerous”), there’s more actual singing – not just from Danny (“City Of The Dead”, “Alright”) – while the rapping sounds more intense (“Trap God”, “Go To War”), the catchiness of songs such as “Happy When I Die” or “Alone At The Top” so much richer… Everything’s heightened, whether it comes from a more menacing nature or a more fetching one. And it’s funny how Hollywood Undead fuse so many styles, to the point where calling them “rap rock” doesn’t cover it (even if it’s the closest label to what they do), and yet manage to craft such a unique identity. The chorus to “Dangerous”, for instance, could fit in any RAGE AGAINST THE MACHINE or CLAWFINGER track, but the song as a whole is definitely HU.

I won’t say it’s their best album so far, as each has its own signature, making it senseless to compare works so different from one another. But I will say that “Hotel Kalifornia” is probably the one where they’ve got the most out of their songwriting and performance skills.

A metalhead who loves photography and her friends.
View all posts by Pieni →
This entry was posted in CD reviews and tagged alternative rock, BMG, Dove & Grenade, Hollywood Undead, Hotel Kalifornia, rap rock. Bookmark the permalink.