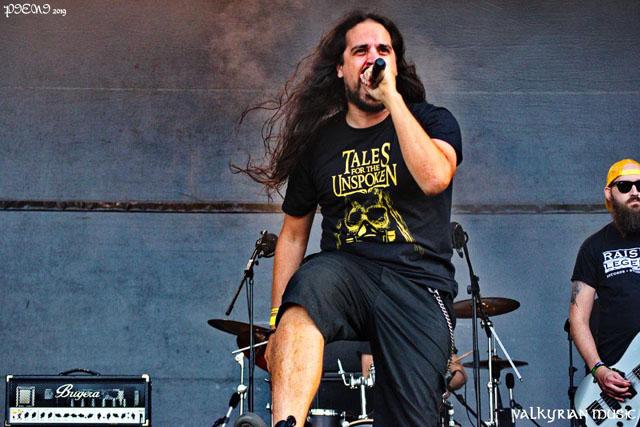 Marco Fresco himself was the one saying this was the first time in twelve years that TALES FOR THE UNSPOKEN were on stage without founding member Nuno Khan. The guitarist was leaving to the United States, in order to begin a new chapter in his life, and remaining in the band from a different continent wasn’t viable. But with bassist Nuno Raimundo picking up the guitar and guest TERROR EMPIRE–Rui Alexandre giving a helping hand on the bass, they proved capable of moving forward.

EQUALEFT–Miguel Inglês got on stage for “I, Claudius” and, as usual, the gig ended with “N’Takuba Wena”, on which Fresco remarked, with a wistful smile, that none of its authors were present, as the song had been co-written by Khan and Guilherme Busato, currently in DESTROYERS OF ALL.

A metalhead who loves photography and her friends.
View all posts by Pieni →
Gallery | This entry was posted in Concerts and tagged Ecos Culturais do Louro, festival, Laurus Nobilis Music Famalicão, LNMF, Louro, metal, Tales For The Unspoken, Valkyrian Music, WOM, World Of Metal. Bookmark the permalink.