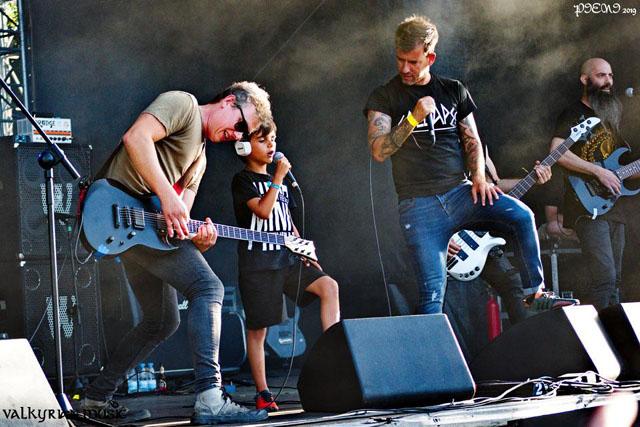 Keeping up with the diversity, the last band of the afternoon brought all the energy that an industrial metalcore act can bring. The crowdfunding campaign which HOCHIMINH had launched for the release of “This Hell” was still on, although the goal had already been reached, showing how much the fans are looking forward to new songs. But for now, classics such as “Reload” or “Way Of Retain”, the cover of DEPECHE MODE‘s “Enjoy The Silence” or the title-track of the latest EP “Ashes” had to do the trick. Those and one of the highest moments of the whole festival, because whether you like the genre or not, you just can’t stay indifferent to an eight-year-old special guest. Guilherme, the older son of singer João Ramos, put a smile on everybody’s faces when he said “good evening” in broad daylight; but when he actually sang, the smile was more of approval than out of sweetness.

A metalhead who loves photography and her friends.
View all posts by Pieni →
This entry was posted in Concerts and tagged Ecos Culturais do Louro, festival, Hochiminh, Laurus Nobilis Music Famalicão, LNMF, Louro, metalcore, Valkyrian Music, WOM, World Of Metal. Bookmark the permalink.