Interview with THROUGH THE CRACKS

Just a little more than a year has passed but a lot has changed in Through The Cracks since I’ve last talked to founder Jimmy Bergman about it (read here); a new interview was in order. I amended that on the day the band played their first show, catching up with them before soundcheck. It was a sunny afternoon in Gothenburg, so we had our interview outside, near the canal that runs close-by Sticky Fingers. 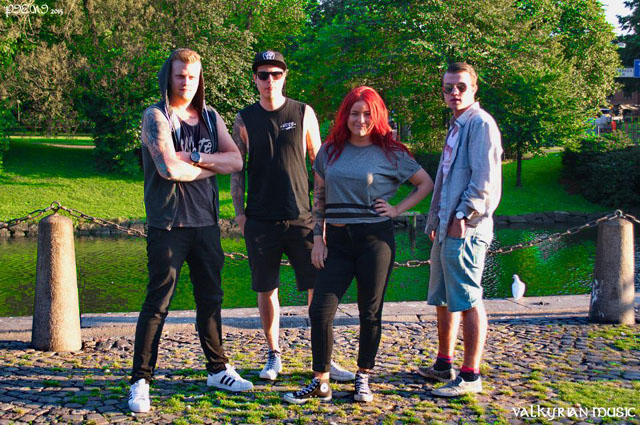 Renata: hello boys and girl. Thank you so much for taking the time to talk to me on such an important day for you. When I interviewed Jimmy last year, Through The Cracks had a whole different line-up, so I’d like to start there. Sara, how did you join the band?

Sara Lindberg: Well, I knew Niklas (Aggemyr, bass) from before. He recorded me with my old glam rock band, Lazy Lizard, when I was just 16 years old. Then on Facebook he wrote me a couple of times“oh, come down and try out for my band”. But I was skeptic at first. I didn’t like what they were doing at the time, the song that he sent me, so I was always coming up with excuses like “I don’t know if I have the time”. (laughs) But I ended up going to the studio and it was great fun. Especially because they said I could make changes, write new lyrics and new melodies, so it turned out a really good match.

Renata: I guess that’s an automatic “no” to my question regarding hearing the first two singles (“Breathless” and “Marionette”) with your voice…

Renata: I also read on Jimmy’s blog that you wanted to go heavier. How heavier?

Sara: A little bit more… progressive. I really like Alter Bridge because I love the way Myles Kennedy sings, with a lot of heart, a lot of soul… it’s beautiful! And the riffs and the music are heavy and still groovy… I think they’re more advanced than some of the other bands. And that’s the direction I want us to go. I want our music to touch people.

Renata: Niklas, your turn: how did you go from producer to bass player? Do you even know how to play (laughs)?

Niklas: Yes, I promise! You’ll see it tonight. I’ve actually played bass for some 20 years now. I think it was when we recorded “Marionette” in my studio that Jimmy asked me to join the band. I thought “yeah, what the hell”.

Jimmy: But it was when he toured with The End Of Grace (Jimmy’s other band – Niklas replaed bass player Johan Hagman while the latter was on paternity leave) that I thought of it. That tour was his trial by fire. (grins)

Renata: And since we’re talking about TEoG… Andreas, how did you ended up replacing Daniel (Holmgren, currently studying in U.S.A.)? You actually like it or you’re just giving a helping hand to your band mate Jimmy?

Andreas Hagman: Well, to be honest… this sucks. (everybody laughs) No, it was Sara who came to me at a gig and said they needed a stand-in drummer. I don’t know if they were desperate or if she wanted me…

Sara, interrupting: No! I really thought Andreas was good.

Andreas: So she asked me if I wanted to join the band, I said I’d think about it… But then I heard the demos she sent me and I really liked it. I think this band is stepping up their game and can go far, so even just as a stand-in member, I’m stoked.

Renata: Well, you’re in the promo shots, so…

Sara: Yeah, he’s part of the band! (Note: meanwhile, it seems that Daniel isn’t coming back and Andreas was made full-time member of Through The Cracks).

Renata: And how’s the songwriting process? Everybody’s involved or Jimmy’s the big boss?

Niklas: The thing is that Jimmy works like two hours a day… (everybody laughs) No, I’m joking, but he has more free time than the rest of us and so he sits down and works on the songs. But that’s cool ‘cause he has great ideas and records many great songs. Then he sends them to the rest of us and we let Sara take on the lyrics and the melodies, but we all add a little something to the process, we all have a saying in it.

Renata: And how do you write the lyrics, Sara? You think of a theme you want to approach and you adapt it to the song, or it’s the song that inspires the lyrics?

Sara: The latter. When Jimmy sends his stuff over, I try to figure out some fitting lyrics to that melody, to that vibe. If it’s a sad song it’s got sad lyrics, if it’s an angry song, I’ll write about something that makes me mad…

Sara: I write songs about Jimmy being a dork. (grins) But my dad actually said to my mom that if “Mother” was about her, then “Hateful Things” had to be about him. (laughs)But he was joking.

Renata: And favorite songs? Which is your favorite?

Niklas: Yeah, the new song is good, but my favorite is “Learn To Run”.

Sara: That’s because you sing on it!

Niklas: No, it’s not because of that! I really think that that song has something more than the others, much more spirit in it.

Sara: Well, one of the reasons I prefer “Soulless Man” it’s because it’s challenging to sing it. It’s not hard but it gives me the chance to show a side of my voice that I really like to use, that it’s fun to use.

Renata: And when will we be able to hear this new song?

Niklas: Well, you’re going to hear it tonight (grins). We’ll release it as a single this autumn. Then after the New Year we should return to the studio. We haven’t decided yet if it’s going to be an EP or a full album; we’ll see how many songs we come up with. But we’ll be working on it and we’ll be posting updates on Facebook, so stay tuned.

Renata: Jimmy, Through The Cracks is your baby. When you started it out a little over a year ago, did you think this is where you’d be today?

Niklas: Did you think you’d have me in your band? (everybody laughs)

Jimmy: No, to be honest no. Through The Cracks started as a ballad project, with lots of string arrangements. But I like heavier songs and I think that now we have a great mix of both, so we’re going in the right direction. Our new song, for instance. “Soulless Man” is groovy, has more riffing and not so many back tracks. That’s what I want for Through The Cracks now.

Renata: And expectations for tonight?

Jimmy (quoting The End Of Grace): World domination! (everybody laughs)

Sara: That nobody fucks up. And that there will be a lot of people coming to see us. This is my first gig outside of Stockholm so I’m a bit nervous but also excited for having new faces seeing me. I hope they see us and think “look at them, what a cool band!”. I hope they’ll like us.

Renata: I’m sure they will. Thanks again for this little chat and see you in a couple of hours, on stage!

Through The Cracks: Thanks for your support! 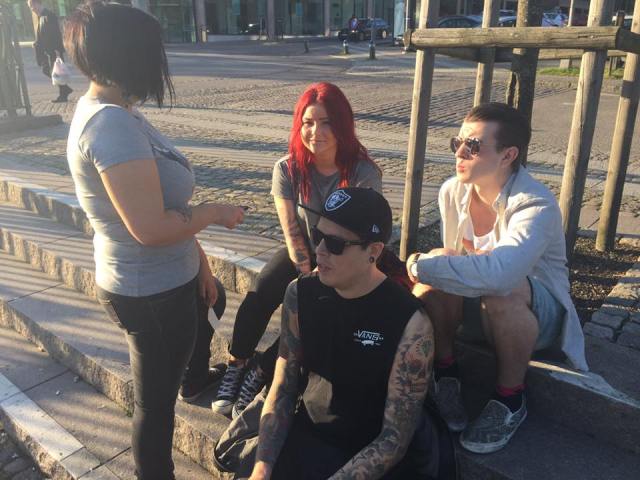 A metalhead who loves photography and her friends.
View all posts by Pieni →
This entry was posted in Interviews and tagged alternative, Gothenburg, interview, rock, Through The Cracks, TTC. Bookmark the permalink.