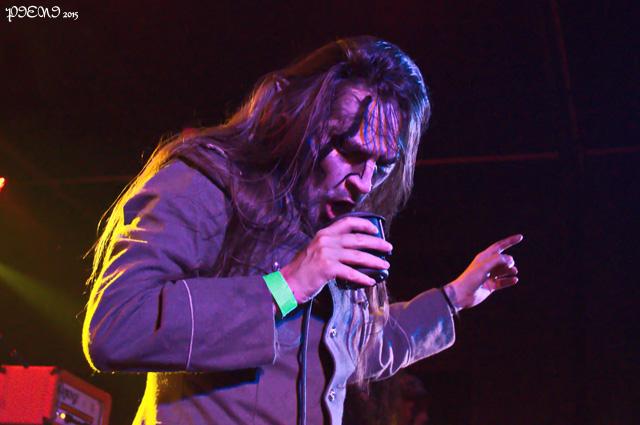 With “Nattfödd” celebrating its 10th anniversary last year, FINNTROLL embarked on an intense European tour where they’ve been playing the album in full. The second leg of the tour included an one-off show in Portugal that was almost a no-show – there were some problems during the trip between Madrid and Porto (“you wouldn’t believe it if I told you”were Vreth’s words), but they made it, about forty minutes later. And since half of the gigs in my country run late, we didn’t even realize how serious the situation was.

I know some people left after HATESPHERE, but still the room was more crowded for FINNTROLL than at the opening of the doors. That’s the downside of having a bill of so distinct genres – it reaches a wider range of public, more tickets are sold, but it doesn’t mean all the people will watch all the bands.

Between gigs there’s always background music playing, but this time we had… frogs. And crickets. A very nocturnal sound. I know that trolls live in swamps and “nattfödd” means “born at night”, but listening to that during the whole intermission was a bit too much. Or maybe it was my eagerness to see FINNTROLL after six years.

Without surprise, “Nattfödd” was performed in its entirety and then came the promotion of the latest “Blodsvept” (that’s actually two years old already – damn, time flies!) mixed with a bunch of classics. All drenched in beer and happy dancing.

Vreth was quite chatty, to which the crowd responded loud and cheerful. At some point he asked who had been at their last gig there and I was surprised that not many hands were raised. But then again, there were lots of kids at the venue, I suppose they weren’t old enough to attend a festival back in 2009… (I was there, took a few cool pics as well: https://frontrowforever.net/2011/05/28/revisited-finntroll-caos-emergente-20090913/)

I believe it was after “Jaktens Tid” that they left the stage and the damn frogs echoed again until Finntroll returned for the encore. But by this time I was too pleased to be bothered by the croaking – these trolls don’t belong in the forest but definitely on stage.

A metalhead who loves photography and her friends.
View all posts by Pieni →
This entry was posted in Concerts and tagged 10th anniversary, black metal, Finntroll, folk, Nattfödd, Porto, SWR Inc. Bookmark the permalink.