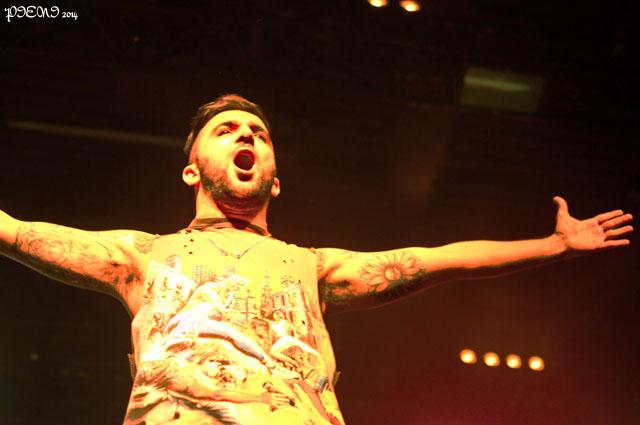 HILLS HAVE EYES took some time to get on stage as there was some problem with the sound. People were getting impatient and eventually the show started, even if the tech wasn’t 100% satisfied with the sound. But the crowd clearly didn’t care – when a band puts up a show like HHE does, imperfect sound is a minor detail. Such an adrenaline discharge! At some point singer Fábio Batista asked who was seeing HILLS HAVE EYES for the first time and a bunch of arms were raised. But that didn’t mean they’d never heard of them before, ‘cause the choir of voices singing along the songs was way too loud. And those who weren’t singing, were vigorously headbanging or moshing – HHE are definitely loved and everybody wanted to shake Fábio‘s hand when he jumped in the pit and greeted the fans.

When you don’t have too much time to play, it’s only natural that you focus on your latest work and neglect the older stuff. That’s what HHE did (as much as I’d have loved to listen to “Daydreaming Isn’t So Good After All”, for instance)– the set was almost entirely focused on “Strangers”, the “almost” meaning a new song called “Bringer Of Rain”. Since “Strangers” was released in 2012, it’s about time its follow-up starts getting shape!
Just like the studio version, Vasco Ramos from MORE THAN A THOUSAND joined Fábio on stage to sing “Anyway, It’s Gone”, and then the title-track of “Strangers” closed a gig that lasted a bit longer than KANDIA’s but still not long enough. HILLS HAVE EYES have just been added to my bands-to-see-as-headliners list.

A metalhead who loves photography and her friends.
View all posts by Pieni →
This entry was posted in Concerts and tagged hard club, hills have eyes, More Than A Thousand, screamo, setúbal. Bookmark the permalink.