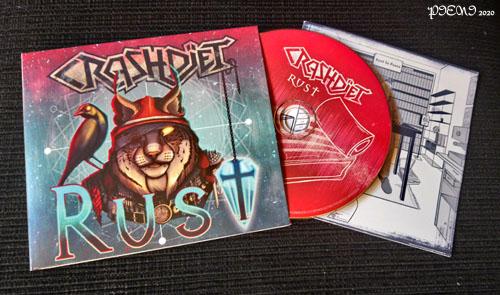 It’s been over a week since “Rust” was released but only now I’ve managed to write about it. Why? Because every time I’ve started doing so, the songs popped up in my head and I just couldn’t stop singing along and moving my whole body to their rhythm. When the single “We Are The Legion” was released on New Year’s Eve 2017, I felt that old school sleaze vibe which CRASHDÏET have always offered us and knew that whatever came next would be worth the waiting; still I was amazed at such worthiness.

Don’t expect me to compare singers, as that wouldn’t be fair to any of them. I’ll just say that Gabriel Keys has a powerful voice which fits the band like a glove, and even though I’ve only listened to him in the new tracks, I can imagine him singing the old ones as if it had been him who’s originally recorded them. Yeah, that kind of voice.

They’ve recently asked on their Facebook page which was our favorite song off the new album and to me that’s an honest trick question. How can I choose between the enticing riffs and catchy chorus of the title-track and the seductive melody of “In The Maze”? How can I choose between the enthralling beats of “Into The Wild” or the upbeat pulse of “Crazy”? The heart-warming ballad “Waiting For Your Love” in contrast with the sleazy speed of “Reptile”? And what about the hymn-ish “We Are The Legion” or the crowd-friendly “Filth & Flowers”? The latter even has parts as if recorded live because it’s exactly the kind of song that will have the audience cheering and do that now-you-sing-it game that vocalists love to put us through.

CRASHDÏET have had their fair share of downs but their albums have always been ups in their career. I won’t say “Rust” is the highest up so far but, once again, only out of fairness. I can say, though, that this is the essence of sleaze rock, bearing such purity and class – so hard to find nowadays.

A metalhead who loves photography and her friends.
View all posts by Pieni →
This entry was posted in CD reviews and tagged CrashDïet, Dïet Records, glam rock, Rust, sleaze rock. Bookmark the permalink.