AMORPHIS’ “Under The Red Cloud” 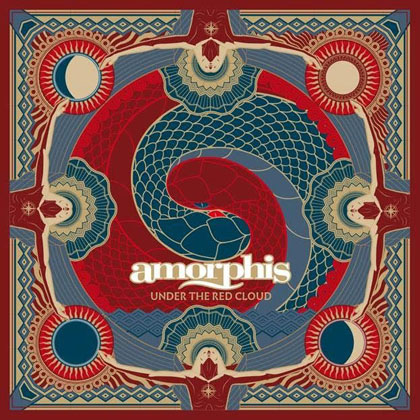 First thing you need to know – in case you’ve missed both singles “Death Of A King” and “Sacrifice” – is that AMORPHIS are still on the melodic metal path. Touring in celebration of the 20th anniversary of “Tales From The Thousand Lakes” was just that – a celebration of the past. They’re not returning to the death-ish doom of those early days, although the melancholy is still there in full (as it’s always been). Mind that I’m not complaining; personally, I prefer this smoother approach. I just thought I should warn the old school fans who went bananas with the aforementioned tour. I will complain, though, about the somewhat disappointing album that “Under The Red Cloud” turned out to be, regardless its genre.

The opening title-track is quite good, the keys combined with the guitars building that typical AMORPHIS atmosphere. The riffs and Tomi Joutsen’s growls make a hell of a chorus and the song eventually sticks to your brain. But sadly, that doesn’t happen much more throughout the rest of the album.

“The Four Wise Ones” has some spirit to it, having the faster and heavier rhythm. “Death Of A King” was a brilliant choice for single, as the sound that AMORPHIS got us used to is played in Arabic variations and the result is positively interesting. As for “Sacrifice”… well, that’s more radio-friendly and probably why it was released as a single. Apart from an elaborate guitar solo, its composition is not very impressive. The folkish “Tree Of Ages”, that features ELUVEITIE-Chrigel Glanzmann playing flute, is pretty catchy and I guess that “White Night” may stand out for the participation of Aleah Standbridge, although the song itself is a bit dull. And that’s about it. It’s not that “Under The Red Cloud” is a bad album, but there’s something missing to make it a great one. The everyday fan of the band will probably enjoy this, but the most demanding music lovers will sense that “lack of something”.

A metalhead who loves photography and her friends.
View all posts by Pieni →
This entry was posted in CD reviews and tagged Amorphis, folk, melodic metal, Nuclear Blast, under the red cloud. Bookmark the permalink.

2 Responses to AMORPHIS’ “Under The Red Cloud”