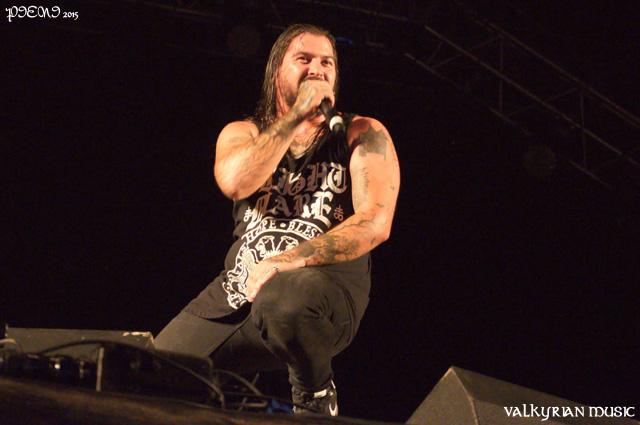 Then MORE THAN A THOUSAND stormed the stage with “Feed The Caskets”. Like I’ve said before, they had a legion of fans eager to see them – including me. MTAT announced early this month that they’re going into a hiatus, one with no foreseen expiration date, so I tip my hat to Laurus Nobilis promoters for recognizing the band’s talent (trust me – that’s not always the case around here, in their own home country) and giving them one more chance to say goodbye to their fans – some of them who were seeing MTAT for the first time and whom singer Vasco Ramos “welcomed to the family”.

I’ve seen MTAT a couple of times before (a lot less than I’d like to, sadly) and the interaction between the band and the crowd feels indeed as if you’re among good friends. Vasco keeps the spirits up constantly, asking for screams, jumps, fists in the air and mosh pits, and the other members, even without a microphone, encourage the crowd just the same by clapping their hands or simply with their lively posture. So what if Vasco went out of tune once or twice? Their music is top-notch metalcore and the way they give themselves to it is a match. I was just hoping for a somewhat longer gig, but that understandable delay messed with every band’s schedule (except for the headliners, that is). Still we heard a fair share of their mandatory songs, the last being the usual “No Bad Blood”.

A metalhead who loves photography and her friends.
View all posts by Pieni →
This entry was posted in Concerts and tagged Famalicão, final tour, Laurus Nobilis, metalcore, More Than A Thousand, MTAT, new festival. Bookmark the permalink.