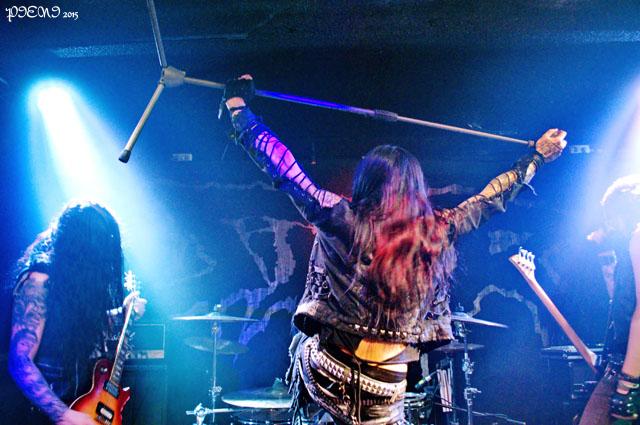 After releasing “Disguised Vultures” early last year, SISTER toured around in support of other bands. Now the vultures decided it was time to fly as headliners and I caught up with them in Barcelona.

It was precisely in Spain, although in Madrid, that I’ve heard/seen SISTER for the first time. They blew me away then, and they still blow me away now, with their mix of dark punk and dirty sleaze.

With only two albums out (and a couple of Eps, although only “Deadboys Making Noise” seems to count, given the way-too-glam nature of the very first one, “Shock Rock Party Pop” ), the setlist was more balanced than KILLUS’ when it comes to new and old stuff. Well, less new – “Hated” was released in the Summer of 2011, so it’s not exactly old.

One by one, the boys got on stage. Singer Jamie was the last, wearing a mask like I saw him do in London last year – meaning that “My Enemy” would kick off the show. “Disguised Vultures” would follow suit, then “Bullshit & Backstabbing”… killer song after killer song! But a good rock’n’roll band always has its ballads and I was more than happy when SISTER played both of theirs – “Would You Love A Creature” and “Naked”. With only Tim on an acoustic guitar and Jamie on vocals, “Would You Love A Creature” sounded better somehow. Nothing to do with the lack of the piano keys from the studio version, as I actually find those lovely. It was really Jamie’s voice that sounded steadier and cleaner.

At some point, Jamie left the stage and bass player Rikki approached the mic, asking us if we liked SEPULTURA. They would then start playing “Refuse/Resist” and for a moment I thought Rikki would sing it too. But we weren’t that lucky – it was just a brief instrumental moment.

After going back to the aforementioned “Deadboys Making Noise” EP through “Crash Boom Bang” (no, not a ROXETTE cover, even though that would be cool som fan), they finished the gig with “Please Kill Me”. I was a bit sad that they only played for an hour, but I assure you every minute was worth it. And given the fiery reaction of the crowd, I believe I speak for everyone who was there.  If you ever have the opportunity to see them, don’t waste it. You won’t be sorry.

A metalhead who loves photography and her friends.
View all posts by Pieni →
Gallery | This entry was posted in Concerts and tagged barcelona, disguised vultures, rocksound, sister, sleaze punk, vultures over europe. Bookmark the permalink.