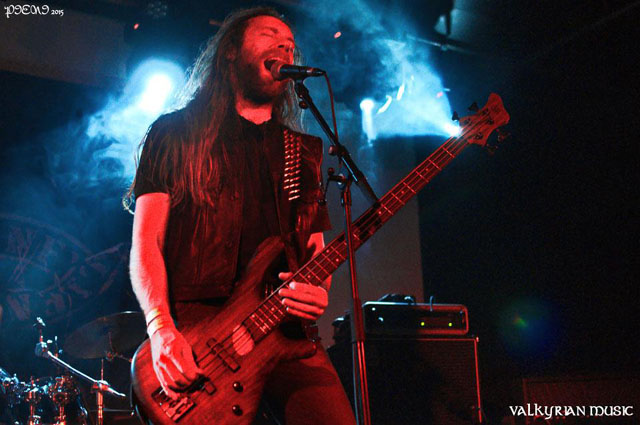 VALLENFYRE decided to choose an Iberian band to support them and the lucky ones were Barcelona-based FOSCOR. Not that it was just luck – they actually deserve it. Formed in 1997 and having released four albums – the latest, “Those Horrors Wither”, last November, so it’s quite fresh – FOSCOR play a mix of black and death metal, with some melody in-between. Plus, singing in both growling and clean tones, in English and Catalan, the outcome is exquisitely good! And foscor means “darkness” in Catalan, by the way.

They focused mostly on “Those Horrors Wither”, of course, but played a couple from the previous “Groans To The Guilty” and the title-track of their second album “The Smile Of The Sad Ones”. Singer/bass player Fiar addressed the audience often, in Spanish, which was totally fine since Spanish and Portuguese are very similar; but still he apologized for not being able to speak Portuguese. How nice of him! He did say “obrigado” (thank you), and then spoke in English when it was time to thank the crew and their VALLENFYRE “brothers”.

Too bad there wasn’t that many people to welcome them, and the few who were present were a little cautious at first. Eventually the applauses became more vigorous and genuine, but still too far from what it should have been, given the quality of the show.