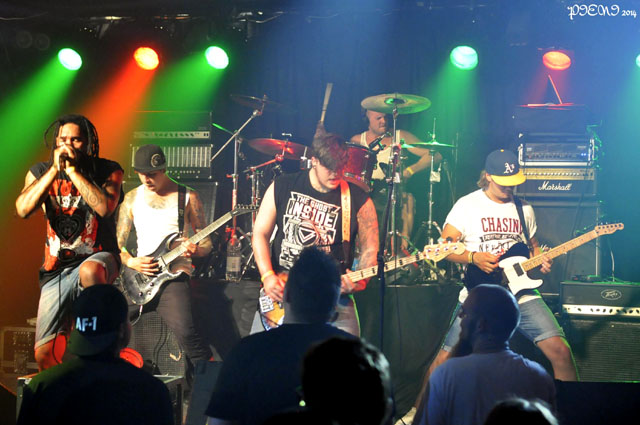 Göteborg Metal Fest was this really cool event that took place last Friday. Well, cool in the sense of “awesome”, because the literal meaning, regarding temperature… dear Lord! As THE END OF GRACE-Kriss would later say, “it was like playing in a sauna”.

The original line-up included A SILENT ESCAPE and pointed BATAAR as the headliners. But about a week prior to the show, THE END OF GRACE were announced as the headliners and A SILENT ESCAPE’s name erased, just like that. No one gave an explanation for these changes and I didn’t ask for any either – I don’t know A SILENT ESCAPE well enough to be bummed by their cancellation, and as you probably know by now, TEoG is one of my favorite bands and so I was stoked to see them topping the bill. Even if just for “prestige” sake, as every band played exactly the same time (half an hour).

Now, what’s there to say about TEoG that I haven’t said before? Oh, wait, there is something – this was their best show! And the funny thing is that the heat affected the band’s computer and some of the backtracks simply didn’t play; that Thomas wasn’t playing on his drumkit and, according to him, “some things were missing” so he wasn’t totally satisfied with his performance at the end; that, again because of the heat, Kriss’ voice was somewhat broken near the end; that they skipped one chorus in “Metal Mulisha”… But a great show doesn’t need to be technically perfect – for that, you stay home and listen to the studio recordings. A great show is all about the band’s commitment to their music and the empathy they establish with the crowd. Who, by the way, was just as amazing – there’d been lots of headbanging and a small mosh pit in CHASING NEVERLAND, and BATAAR had some devoted fans screaming along the lyrics, but THE END OF GRACE got the most vigorous circles and fists in the air. Kriss covered every inch of that stage, and during “Fist Face Bleed” (that BATAAR-Seb helped singing) Jimmy jumped into the front rows, playing his guitar side-by-side a fan in a TEoG t-shirt. And since they improvised well enough to make up for the little slips I pointed out, which also takes skill, I say it again without second thoughts – best TEoG show I’ve seen so far.

A metalhead who loves photography and her friends.
View all posts by Pieni →
This entry was posted in Concerts and tagged Bataar, deathcore popcorn, Göteborg Metal Fest, metalcore, RockBitch Management, TEOG, The End Of Grace, Valand. Bookmark the permalink.