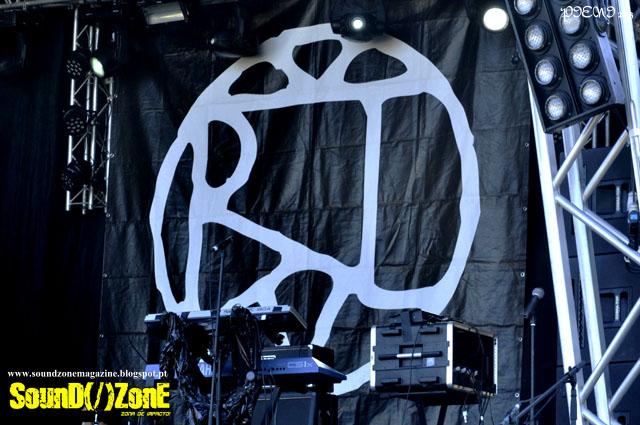 » Up next came the one and only BIZARRA LOCOMOTIVA. Singer Rui Sidónio spilled adrenaline through every pore from minute one, which isn’t a novelty anyway. And despite the lack of news also in their discography, no one seemed to mind and the crowd’s response was just as restless. The show started with “A Procissão Dos Édipos”, and when the sung part was finished, Sidónio jumped into the middle of the first rows and danced with the fans, returning on stage right before the song came to an end and the gig proceeded with “Egodescentralizado”.

Tó Pica would later join the industrial band, obeying their dress code (which means wrapped up in black plastic) to help Miguel Fonseca with the guitars in “Anjo Exilado”. In the end, as he’d done earlier with his own band SECRET LIE, he threw his guitar to the audience who luckily guessed that it wasn’t a gift and returned it to its rightful owner. The “poderosa musculatura” (Portuguese for “powerful muscle”, featured in the song’s lyrics) of “O Escaravelho” closed a great show. «

A metalhead who loves photography and her friends.
View all posts by Pieni →
This entry was posted in Concerts and tagged BIZARRA LOCOMOTIVA, industrial, Prime Artists, Rui Sidónio, Vagos, VOA. Bookmark the permalink.