For Suzy and Phil. 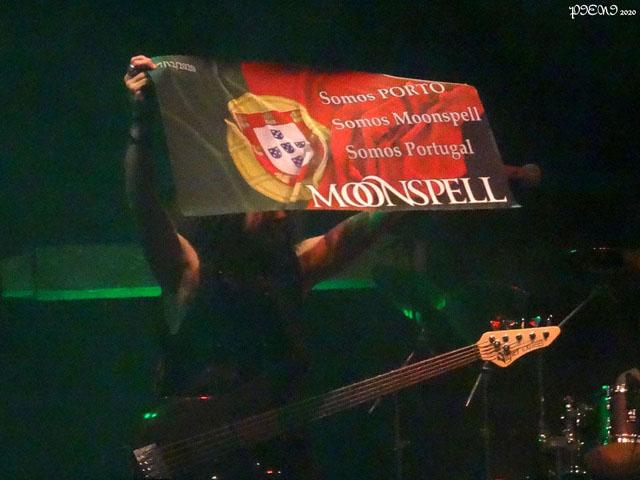 Funny how you’re so hungry for live music and then almost miss a concert next door to your granddad’s… But there’s a Portuguese saying that goes something like “those who have friends don’t die in prison”, and so I was told about this event just two nights prior and offered a free entrance.

“Hermitage” will be released in February via Napalm Records (counting on writing a review, like I’ve done with the previous three) and the video for “The Greater Good” has been rolling on YouTube for about a month – it made total sense to kick off the show with it. Later on, they would premiere live the second song already released (just a week before), “Common Prayers”. But this wasn’t a promotional show for the upcoming record at all; in such dire times for artists, the Santa Casa organization has put up a string of shows between Lisbon and Porto, and Fernando Ribeiro thanked them for taking heavy metal in consideration and choosing MOONSPELL to represent it.

It was a shorter gig than usual, in order to respect the pandemic curfew, so Fernando didn’t speak much in order to avoid “going to jail with all of us”. Also because he believed that, just like him, we were a bit tired of listening about pointless theories regarding these strange days…

“The Butterfly Effect” – the kind of album you “first think it’s weird, then it gets under your skin” (Fernando‘s own words, or rather, poet Fernando Pessoa‘s words, in another Portuguese saying that loses something in the translation but I think you’ve got the picture) – had celebrated its 20th anniversary last year and they’ve played “Soulsick” and the title-track, which they rarely do. Refreshing, but it was hits like “In Tremor Dei” or the foreboding “Everything Invaded”, classics such as “Opium” or “Wolfshade”, and the mandatory “Alma Mater” and “FullMoon Madness” that really made the night unforgettable.

It was my second pandemic-era show but it still felt weird headbanging while sitting down, with a mask on, and the closest person sitting a couple of meters away. Super Bock Arena used to be a sports pavilion (saw my first rink hockey match there, back in 1991), so you can imagine its size… Don’t know how many gigs like these I’ll see in the future, but I’m pretty sure I’ll never quite get used to it – even if I’ll gladly attend, as my passion for music is way bigger than any weirdness caused by all these safety measures against Covid-19.