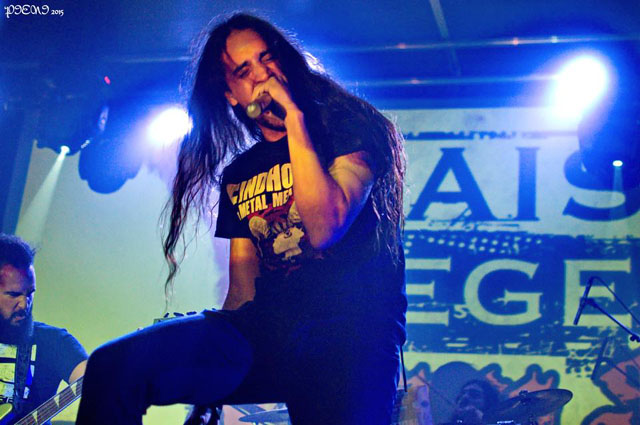 When TALES FOR THE UNSPOKEN got on stage, the crowd had considerably grown bigger, but it wasn’t at its full yet. The absentee’s loss – TFTU are always great live but there was something about this gig that made it better than the several others I’ve seen of them.

2015 saw the release of the band’s sophomore album, “CO2” (review here), which features EQUALEFT–Miguel Inglês – who went by “Jedi Mig” that night… – in the song “I, Claudius”. He was obviously called on stage and singer Marco Fresco told the crowd that later it would be EQUALEFT’s last show with drummer Marcos, as the band had already found a replacement named Miguel. It was a joke, of course, regarding the recent announcement of new guitarist Miguel, making him the third member in the band with the same name. The singer called it the “Miguelification process”. Fresco, the everlasting amuser.

Other recent songs included “Taken” and “Soul For A Soul” (introduced as “soul for a fucking soul”…) but also oldies, from “Alchemy”, like “Say My Name” or “N’Takuba Wena”, had a major role in this party.

A metalhead who loves photography and her friends.
View all posts by Pieni →
This entry was posted in Concerts and tagged hard club, metal, Porto, raising legends, Tales For The Unspoken, TFTU, Xmas fest. Bookmark the permalink.