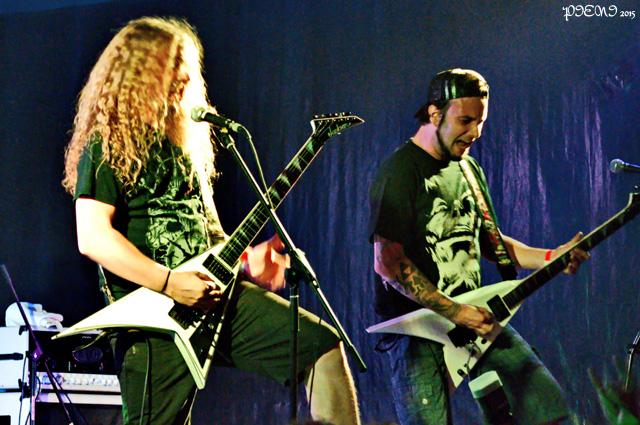 ANGELUS APATRIDA was the only non-Portuguese band of the fest, old school thrash metal from “country next door” Spain. But they’re part of the family, not just for the solid fan-base they’ve built here over the past years but also for recording a couple of albums here, at Ultrasound Studios, and becoming good friends with many local underground bands. One of the most notorious is SWITCHTENSE and singer Hugo Andrade even got on stage to sing “Fresh Pleasure” with Guillermo Izquierdo. Whether they were songs from the new album “Hidden Evolution” or oldies like “Vomitive” or “Give ‘Em War”, the circle pits were as restless as the thrash that was fueling them.

A metalhead who loves photography and her friends.
View all posts by Pieni →
This entry was posted in Concerts and tagged ANGELUS APATRIDA, Casainhos, festival, Loures, old school, Portugal, thrash metal. Bookmark the permalink.