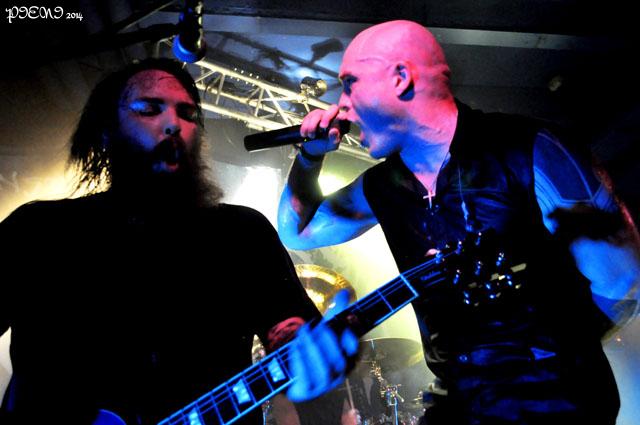 The first leg of The Diabolical Tour of Art isn’t really to promote Sonic Syndicate’s new album, as they’ve only played the two singles recently released (“Before You Finally Break” and “Black Hole Halo”). That promotion will happen in the fall; now they’re just celebrating their return to the stages, in the country they feel most welcome. Fine by me – as much as I want to hear the new songs live, a SoSy show is always a SoSy show, meaning it’s always worth it.

But just because they weren’t promoting the new album fully yet, it doesn’t mean that Sonic Syndicate didn’t come up with something fresh. Kicking off with “Hellgate: Worcester”? Cooling down with “My Escape”? I think I froze for a few seconds when Nathan Biggs announced the latter. This was actually the song that made me surrender to them, six years ago, and as far as I know, it had only been played once, in some kind of special show in Stockholm back then. Don’t know if they’re playing it in all shows of The Diabolical Tour of Art now, but whatever the case, it was a delightful surprise.

A not so great surprise was learning that Karin Axelsson, referred to by Nathan as “our beautiful bass player”, had to step out of the tour due a strain in her wrist (krya på dig, söta Karin). But SoSy “never cancel tours” and so they found in Miche from their friends Degradead a top-class replacement.

Staying in the front row has the downside of not getting the best sound, but since I heard all vocals in Any Given Day, I guess someone screwed up something with SoSy’s sound – I could barely hear Robin Sjunnesson’s voice. Of course that had no absolute impact on the attitude of the band or response of the crowd, but this was my first time seeing them as a 4-piece and I wanted to know for sure if Robinwas up to his new role as backup singer. So I focused just on his voice for a couple of songs – years of practice searching for the bass sound that so many bands seem to dismiss allows me to manage that – and yes, I’m happy to say that the current line-up excels.

Besides the choruses in all songs, key-verses like “don’t close your eyes” in “Flashback” or “… out of control” in “Denied” echoed like thunders inside Zakk. Too bad that this is just a metaphor, as we could have used the rain to wash away the sticky sweat – the venue felt like a sauna! Still no one seemed to care that much about melting away, finding yet the strength for the vocal competition (left side vs. right side of the crowd) in “Burn This City” and the wall of death (no musicians involved this time) in the beginning of the last song “Jack Of Diamonds”.

When I interviewed Robin four years ago, one of the questions was where would he like to record a live album and he replied Germany, as they had the most hardcore fans there. They all still feel that way and Nathan said so a few times, thanking them for their eternal support, for “still being here” after all this time the band’s been away. Not that it’s been THAT long, but we got used to see them around, playing and recording non-stop, and then all the drama one of the former members tried to suck them into… under these circumstances, three years seem like a lifetime. But I was sure this break would make them stronger, and both the new album and this show proved me right.