THE END OF GRACE’s “Lost In Transition” 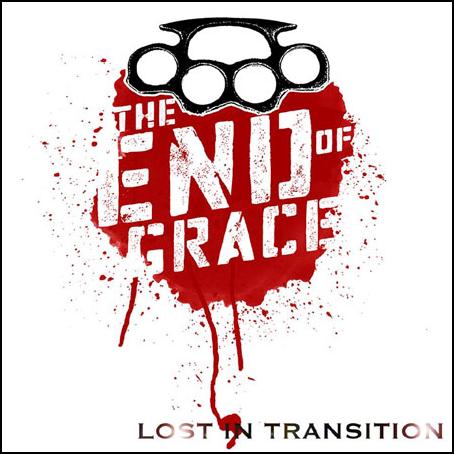 Sometimes it takes just one song for you to fall in love with a band. It doesn’t matter if you don’t know any other songs, or that you’ve never seen them live – that one track tells you that there’s something about that band which will put them on your radar. And “Metal Mulisha” did it for me regarding THE END OF GRACE. Storming and fast drums, riffs that dwell so easily in your ears, the brisk guitar solo…. and “we ride with pride, we ride until we die” reminding you why hooks are called that way.

The first time I’ve listened to it, all vocals were done by Jimmie Strimmel (ex-DEAD BY APRIL, now in ENDS WITH A BULLET). He’s a hell of a screamer, but the clean parts were clearly tuned. Now they have Kriss Panic (from PANIC AREA) doing the harsh tones in growling mode – his death metal school in full charge – and bass player Johan Pettersson taking care of the cleans with his natural tone, so the outcome is rawer, stronger and more “real”. In one word: better.

Even before Kriss, “Fist Face Bleed” already had a whiff of death metal to it through the somber guitars in the beginning and the mosh-friendly tempo later on. Martin Westerstrand, from rock band LILLASYSTER, has a guest appearance on this track, singing a few Swedish verses in a more aggressive way than the first recordings he did of them. So the clean, slower and more melodic parts create a much sharper contrast. There will be a video for “Metal Mulisha”, but should they ever release a single, “Fist Face Bleed” would probably be the best choice.

“Betrayer” is the catchiest song in this EP, but not in a commercial way. It just sticks to your brain. And Thomas Manell revamped the drum work, slightly changing a few beats here and there, but such changes were enough to give it a whole new texture, adding feeling to it.

Johan takes a break from vocal duties in “Forget”, as this has only growls & gutturals, and even some harsh screams, courtesy of Jimmy Bergman and Sulan Von Zoomlander. But it’s their rich work with the guitars that will stand out here, the solo in particular, also somewhat improved since its early version.

“Lost In Transition”, the only song truly new and never released in any other way to the fans (well, except for a snippet or two in the band’s famous Facebook teasers), is fierce in all aspects, the chorus sung simultaneously by Kriss and Johan sounding quite refreshing. Then comes an almost melancholic interlude, which eventually leads to a sequence of heartfelt gang vocals, lasting until the end of the song. Pretty emotional, this one.

And I couldn’t finish this review without praising the amazing job that producer Johan Henriksson (Studio Fredman) did here, making TEOG’s sound so distinctive and stark.

Something bad about this? Sure – it’s just an EP, five songs aren’t enough! But don’t worry. The boys are already working on their debut full-length.

2 Responses to THE END OF GRACE’s “Lost In Transition”