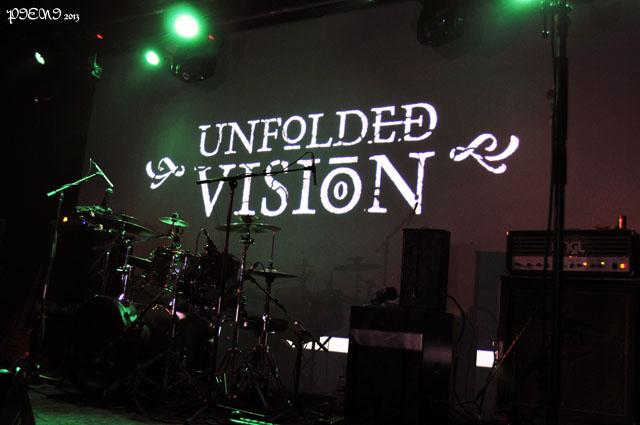 » Unfolded Vision is a rock/metal band formed in late 2006, but their members have been around a lot longer than that. They’ve changed singers a couple of years ago (César Teixeira stepped in for Henrique Loureiro) and I think that was the main reason for their first release to take about six years to see the light of day. But it’s finally here, the 5-track EP “Perspectives”, and the band put up a free-entrance show to introduce it to their friends and fans.

There was an introductory video playing in the background, but something went wrong with the audio. And I’d swear that in the first song the drums were out of synch with the rest of the band. But those were mere details in comparison to the great show that followed. It was the second time I was seeing them with César and even if the first time he sounded really good, now I had the feeling his voice was much stronger, probably more confident.

They played the whole EP by the same order of its tracklist. Well, “whole” it’s not really accurate, as they left out “Perspectives Of Fear”, the last song, which I believe it’s an instrumental melancholic track (haven’t had the chance to listen to the EP yet) and therefore not suitable for such a party night. This means they kicked off with “Fear”, then “Wild And Free”, “Why”  and “Ain’t No Stranger”. Then came the first cover of the night, which César dedicated to Mean Rock Machine – Whitesnake’s “Here I Go Again”. Coincidentally enough, I had seen Whitesnake just the night before in Madrid. And after such a disappointing performance by Mr. David Coverdale, it was really refreshing to listen this epic hard rock song so well sung by César.

Can’t remember for sure if it was “Spellbound” (a new track) or “Shadowland” (an old one) that César dedicated to his father, who was “hiding from the PA” and had his birthday that day. And after introducing the band – something that sadly has fallen out of use these days – they closed the gig with Deep Purple’s “Burn”. «

A metalhead who loves photography and her friends.
View all posts by Pieni →
This entry was posted in Concerts and tagged hard club, Perspectives, Unfolded Vision. Bookmark the permalink.