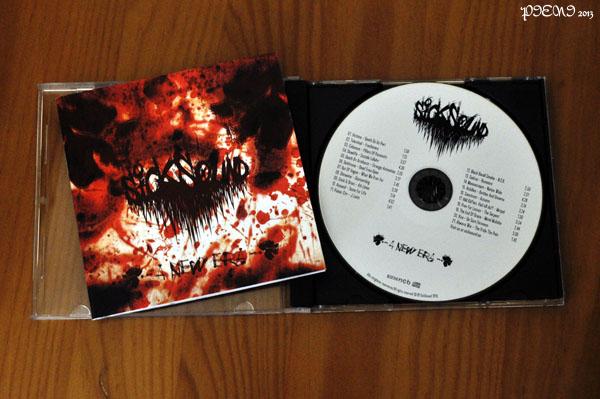 Every fan of extreme music knows at least a dozen major bands who come from Sweden. But Sweden also has “small” bands – and I mean it in terms of recognition/popularity, not talent or potential. So Sicksound gathered 21 of those bands, ranging from the rawest punk to the most abrasive metal.

Victims kick off with their “Death Do Us Part”, a song whose edgy sound makes it hard to decide if it stands on the old-school-punk side of the tracks or if it crosses the border to its sub-genre hardcore. Later on, also Out Of Vogue’s “What We Pray For” and Kira’s “De Som Försvann” will stand in that grey area, even though the first messes around with the tempo a bit too much, more like a psychedelic rock band would do.

The loud and careless way that Tvärnitad deliver “Frashatare” is closer to the original punk attitude, but “AA-Låten” by Stick & Brinn and “J Lavin” by Pulver City both leave no doubt about it, with their frisky beats and looser rhythm. And Death By Armborst’s “Strange Animation” has a lot of garage rock entwined with punk. As for Håll Käften, Vad Vill Du?, their track “Motpol” has these cool hard rock guitars embedded in a punk/hardcore structure.

Straight-forward hardcore comes in the form of Cedron’s “Rumours” and Always War’s “The Pride, The Pain”, the first counterbalancing the aggression with some melody, the latter with strong gang vocals, speedy beats and sharp riffs.

Slowlife is also a hardcore band, although it may take you a while to associate “Suicide Lullaby” to that genre. Not at all a ballad, but there’s a reason why it’s called “lullaby”. Yet the anger flows out loud.

Sanctrum raise the speed a notch and “Autumn” results in a hardcore-meets-thrash song. Something that Achilles should have beaten in terms of brutality, as crust punk is usually part of their formula. But this “Bottles And Dreams” is less extreme than that, although still pretty much mosh-friendly.

In the realm of the other ‘core – the metalcore one – Pray For Locust make a heavy stand with their “Serpent”. Personally, I prefer Ascend’s “Taste For Life”, as the cranking guitars and the catchy chorus have a lot more spunk. But it’s “Metal Mulisha” by The End Of Grace – the reason why I got this album in the first place – that’s still my favorite. The fluid strings – whether in the form of a hook, a bridge or a solo – are just enthralling and the drum patterns can’t be called anything less than feral.

Colossus got the only sludge slot of this compilation with their “Pillars Perennity”, but Sicksound went further into the metal scene and reached the death border, giving us the somewhat melodic death of Monoscream’s “Nation Wide”, the thrashy death of Dethrone’s “Dead Eyes Open” and also the plain death of Skineater’s “Dismantling”. A big cheers to diversity!