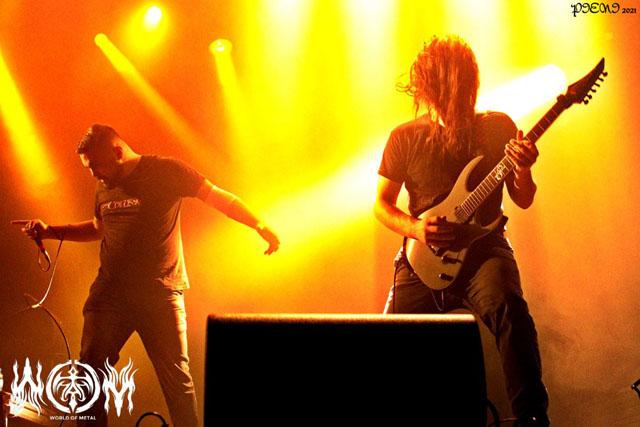 Released in November last year, the presentation gig of SOTZ’ debut full-length was just one more suffering at the hands of the pandemic. We’re still far from gathering the perfect conditions for a proper party – jumping around, without any kind of distance or face masks smothering our enthusiastic screams – but both band and fans didn’t want to wait anymore. This time, Hard Club didn’t play the recording listing the DGS (the Portuguese health directory) rules, but we were “beautiful, smart and awesome” (quoting Dan Vesca) and we all (or almost…) obeyed them even without the reminder.

“Popol Vuh” was performed more or less by the same order of its studio version. The level of familiarity between band and audience was clearer and soon jokes started flowing back and forth – especially regarding Vesca‘s famous fondness for cats (“miau caralho!” – which translates more or less to “meow mothefuckers!”).

A gig is only a real gig if technical glitches are involved – Vesca himself said so – and Pedro Magalhães‘ guitar had the honor of keeping such tradition. Whatever it was, it was quickly solved, apparently by the promoters, as the frontman asked for an applause for Tuga Gesso, who “had everything”.

“Popol Vuh” features three guests, but given the fact that one of them resides in Italy (Stefano Franceschini of ABORTED, on the track “Tree Of Knowledge”), it was obvious they couldn’t be all present. On the other hand, when Vesca asked who liked DARK OATH, it wasn’t a big of a surprise when the left-handed guitarist Sérgio Pinheiro got on stage to play “Eye Of Balaam“. Not that being left-handed has any influence on his talent, but with all the hair and the back lights, I didn’t get any photo of the boy’s face and so you can now identify him on the gallery…

A few more technical problems – this time with João Rocha‘s guitar – on the last song, “Prospects Of Pakal”, when MOONSHADE–Ricardo Pereira was already on stage to help sing it. This is probably my favorite song in the album and the way both singers performed it, giving it all, was simply enthralling. Not that Vesca‘s alone (or the rest of the band’s) wasn’t; in fact, after a handful of SOTZ’ gigs I can vouch for their growth.

A metalhead who loves photography and her friends.
View all posts by Pieni →
This entry was posted in Concerts and tagged Death metal, hard club, popol vuh, Porto, release party, Sotz', Tuga Gesso, WOM, World Of Metal. Bookmark the permalink.