Five years ago, when THE MISSION did a 25th anniversary tour (report here), many believed it to be a farewell tour and the tickets sold out quickly. Luckily they were wrong and the band returned to celebrate 30 years in the biz, as well as promote a brand new album (“Another Fall From Grace”). I guess the new album kills any thoughts of “farewell tour”, so that the show was once again sold out for over month indicates just how loved THE MISSION are around here – a love more than deserved. 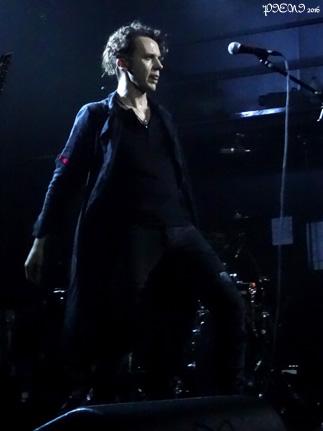 South African THE AWAKENING was a dashing surprise of good ol’ goth/darkwave. Even though this project was put together by Ashton Nyte in 1995, it was the first time I’ve heard of it (no, boys and girls, I’m not the music encyclopedia you all believe I am). When Ashton introduced a song featured in their “15th anniversary anthology” (“Upon The Water”, I think), I couldn’t resist googling on my phone to check if I hadn’t misheard – not just due to my ignorance about their existence but also because he looked too young to have a band for so long. But then he introduced “Maree” as a “song about a girl” that he had written when he was 16 and suddenly the math made more sense.

In the beginning of their career, they felt the need to cover something in order to draw attention and they chose Simon & Garfunkel‘s “The Sound Of Silence”. I’m glad they still play it live as it sounds beautifully (as a friend of mine would say, “take THAT, DISTURBED!”

). And then they finished with “The Dark Romantics”.

The backdrop was the cover of the aforementioned “Another Fall From Grace”, but like any other band with a long and successful discography, only three songs were played (“Met-Amor-Phosis”, “Tyranny Of Secrets” and “Only You & You Alone”). And eventually the backdrop changed to one with THE MISSION logo.

Evi Vine was a special guest in several songs (“Buy her wonderful albums”, said Wayne Hussey, “you (insert mimic of joint smoking here) and chill. You’ll love it!”), but the real surprise to me was hearing “Like A Child Again”. It was the song that drew my attention to THE MISSION, all those years ago, but they had stopped playing it live for some reason. I was thrilled to hear this sped-up version of it, and by the collective sing-along, so was the rest of the crowd.

The whole band was drinking wine – white for drummer Mike Kelly, red for the other three. When cheering for the first time and getting a loud ovation, Wayne said that it was French wine, and the ovation became a hoot really quick. Wayne grinned “You know I’m joking, right? I’m as fond of the French as you are”. I believe this was meant to have some football connotation, but THE AWAKENING–Ashton, when previously thanking us for our great hospitality, said something like “We were in France yesterday, so we should know”…

“Wasteland” finished the first part of the show, with a shower of white confetti, but we didn’t need to wait long for the encore to begin, with an acoustic version of “Bird Of Passage”. Beautiful, but nothing topped “Butterfly On A Wheel” next – Hard Club almost came tumbling down.

They left after “Belief” but returned a second and final time for “Deliverance”. In the end, we went on (and on and on) screaming the chorus when only Mike stood on stage to help us set the rhythm. “Perfect” is one word to describe it.

A metalhead who loves photography and her friends.
View all posts by Pieni →
This entry was posted in Concerts and tagged 30th anniversary tour, darkwave, everything is new, gothic, hard club, Porto, rock, The Awakening. Bookmark the permalink.