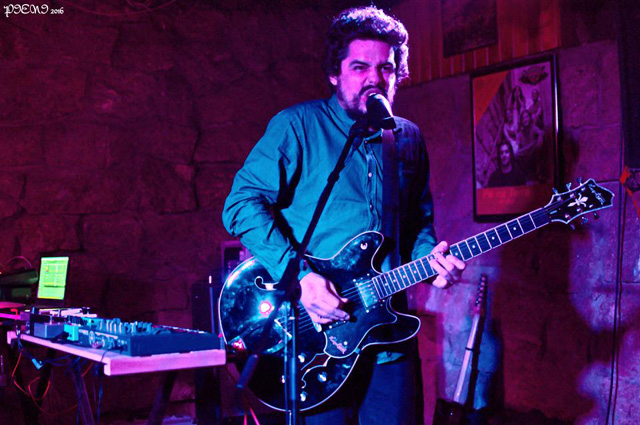 Due to a sudden line-up change in AWAITING THE VULTURES, the post-metal band from Évora had to withdraw from Canecas Fest. It wasn’t exactly a last-minute change, but there wasn’t much time to find a proper replacement either. Which might explain why GRANADA, an alternative rock band, kicked off the fest. Not that they’re bad, don’t get me wrong. It’s just that this was supposed to be a more “metal-oriented” day and they ended up sounding somewhat out of place.

GRANADA had released what I believe it’s their debut album, “AAA”, the previous month, so it’s safe to say the setlist was totally based on it. And while one could tell the trio was really into it, it was their sound tech – and occasionally backing singer – who was the most passionate, dancing like a maniac.

Sadly, there was too many people around him and a very poor light, so I couldn’t take any pictures of him.

The crowd wasn’t as half as enthusiastic, but still applauded warmly after every song – the people of Paços de Ferreira are like that, especially those who attend Canecas.

A metalhead who loves photography and her friends.
View all posts by Pieni →
This entry was posted in Concerts and tagged alternative, canecas, fest, Granada, Paços de Ferreira, pedro preto, rock. Bookmark the permalink.