Unedit version of what was originally posted, in Portuguese, in SounD(/)ZonE. 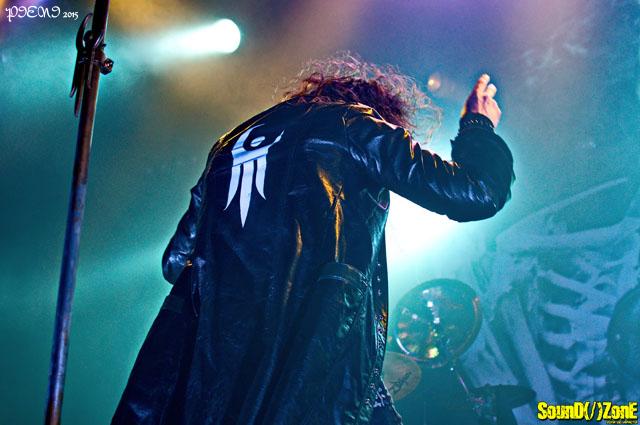 After an evening “taken from One Thousand and One Nights” (quoting MOONSPELL themselves) at Coliseu dos Recreios (Lisbon), it was Hard Club’s turn to go through a similar experience. Or almost, since BIZARRA LOCOMOTIVA didn’t play in Porto. But MOONSPELL and SEPTICFLESH ensured wide smiles on the one thousand faces that, about two weeks prior, had already sold out the venue.

The stage set was changed to the sound of THE MISSION, THE SISTERS OF MERCY, THE CULT, PARADISE LOST and TYPE O NEGATIVE. Yes, it’s important to mention this, as the background music at Hard Club is usually the same and nothing of this nature. I tip my hat to the DJ for choosing songs that MOONSPELL fans might appreciate.

A bigger thank you goes to the light tech, who put up a set of colours and spotlights suitable for taking photos – in general it’s the other way around and the lights only get good enough after the photographers leave the pit.

Now focusing on the gig itself… well, there are no words to make it justice. As I’ve previously reported (here), “Extinct” is a brilliant piece, but its live performance goes much beyond such “detail”; it’s the way MOONSPELL give themselves and how the fans respond to it.

One by one, while “La Baphomette” echoed, mixed with a feminine voice pronouncing something indistinguishable, the MOONSPELL members took their places. The show then started with “Extinct”‘s opening song, “Breathe (Until We Are No More)”, followed by the title-track. In fact, the term “presentation tour” has been taken very literally in this Road To Extinction, since only “A Dying Breed” has been left out of the setlist.

When addressing the audience, Fernando Ribeiro apologized for MOONSPELL skipping “Invicta” (that’s Porto’s nickname) in the “Alpha Noir” tour (“I’m not sure what happenend”) and that it was really good to be back in that town which was so dear to them.

Also TRISTANIA singer, Mariangela Demurtas, was “very dear to MOONSPELL“, using Fernando‘s own words when he called her on stage to sing “Raven Claws”. But before that, in “Medusalem”, Fernando confessed that he’d always dreamed about watching Hard Club “crumbling to the ground” and so he urged the crowd to sing real loud, in order to make his dream come true.

Another thing worth mentioning regards “Funeral Bloom” – “just like he secret agent introduces himself as ‘Bond, James Bond’, also this song should be ‘Bloom, Funeral Bloom'”. And let’s not forget the “snow” that fell on Ricardo Amorim during the guitar solo of “The Future Is Dark”.

“I’m still wondering why didn’t we play here on the last tour…” was how he began addressing “Em Nome Do Medo”. But the real introduction was the first verse of the chorus, while the fans roared the following verses.

Porto was the 18th gig that MOONSPELL played without a break and something that helped them holding on was a “relaxing moment” on stage, observing the crowd dancing to “Ataegina”. By the end of it, he asked rhetorically if were tired, adding that we shouldn’t worry, as the show was almost over. The response was a loud whistle, something that amused Fernando so much that he insisted a few times more on how close the end was, just so he could hear the crowd complain. “Okay, you already know that it’s not really the end, but let’s pretend for a moment that it is, in this song that hasn’t been ours in a very long time, but yours”. You don’t need to be a MOONSPELL fan, it’s enough to know just a little about them to know that he was talking about “Alma Mater”.

The band left the stage only to return a few moments later with a song from “Wolfheart” – “Wolfshade (A Werewolf Masquerade)” – which celebrates its 20th anniversary this year. And knowing that Porto was upset for the “Alpha Noir” tour fail and for not bringing along BIZARRA LOCOMOTIVA (who were playing at Moita Metal Fest that evening), Fernando announced a surprise – a song, also taken from “Wolfheart”, that they hadn’t played during that tour nor did they intend to play again: “An Erotic Alchemy”. Mariangela came back on stage, to sing the feminine verses that Birgit Zacher sang in the original version.

The following would be really the last song of the night – the traditional “FullMoon Madness” – with Fernando asking for a big applause to their “Greek brothers” SEPTICFLESH (“it’s good to see Portugal and Greece getting together for something positive. Great band, great band!”) and promising not letting another four-five years go by without returning to Porto.

The thank-yous to the crowd were constant throughout the concert, but it was the fans who were truly grateful for such a show.

A metalhead who loves photography and her friends.
View all posts by Pieni →
This entry was posted in Concerts and tagged everything is new, gothic metal, Moonspell, Porto, road to extinction tour, sold out. Bookmark the permalink.