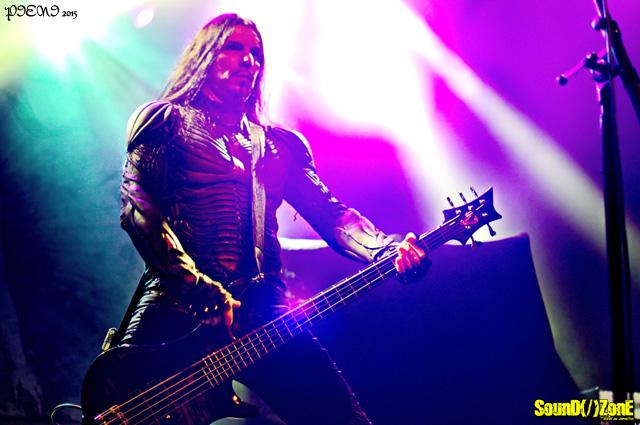 I was counting with a sea of fans, impatiently flooding the corridors, well before eight o’clock; but there was a single line instead, which vanished in two minutes once the doors were open. True, it was Saturday night, end of the month, and the traffic was terrible due to a Portugal Fashion event at Alfândega and to GRUPO NOVO ROCK playing in the street, a couple of blocks away. But if they arrived late to the venue either because they didn’t know SEPTICFLESH or because that latter’s gig in that same Hard Club, back in 2011 (supporting AMON AMARTH), was somewhat poor, then those people should be sorry for not giving the Greeks a (second) chance.

No matter how mixed the opinions might be regarding the band’s latest album, “Titan”, its tracks work extremely well when played live and the audience – filling a little more than half of the hall – welcomed songs such as “Order Of Dracul”, “Prototype” or “Prometheus” with “horns in the air”. Regarding the older songs – taken from just the two albums prior to “Titan” – the euphoria was greater during “The Vampire Of Nazareth” and “Anubis”. But the whole concert was clearly appreciated.

Seth Siro Anton himself was in higher spirits and more talkative than that other time, and most “motherfuckers” were replaced by “my friends”. In the end, when Krimh left the drumkit and waved in gratitude, Seth called him and introduced him, as the young drummer had been in the band for just four months. Krimh was applauded, as well as the news about the recording of the next album, which would be soon.

A metalhead who loves photography and her friends.
View all posts by Pieni →
This entry was posted in Concerts and tagged everything is new, Moonspell, Porto, road to extinction tour, septicflesh, seth anton, symphonic death metal, titan. Bookmark the permalink.