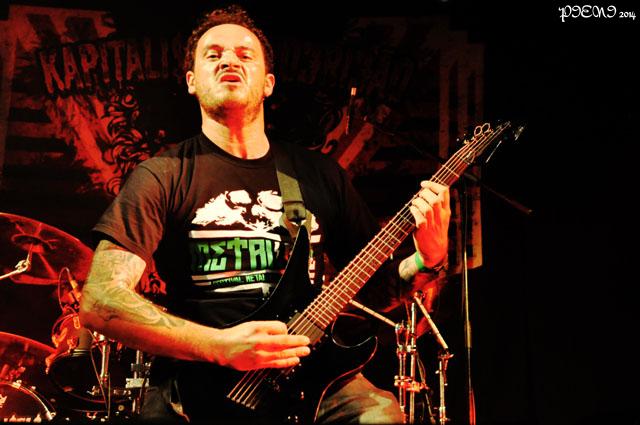 When I first saw the name KAPITALISTAS PODRIDÃO (kapitalists rot – yes, with a “k” – the Portuguese correct form is also with a “c”, as in English), I immediately assumed it was an anarcho-punk band. I was wrong. The anti-political lyrical theme is pretty much the same, but KAPITALISTAS PODRIDÃO is a death metal band. Or at least I think the lyrical theme is the same, given the song introductions made by singer/guitarist Bixo – you can’t really understand the words in a death metal piece unless you have the lyrics in front of you.

Formed in early 2012, I don’t think they have any recordings yet but they’ve been playing live quite a lot, so songs such as “Podridão Nacional” (national rot), “Epidemia Social” (social epidemic) or “Sanguessugas Esturpadoras” (raping leeches) were recognized by some. And rejoiced by many.