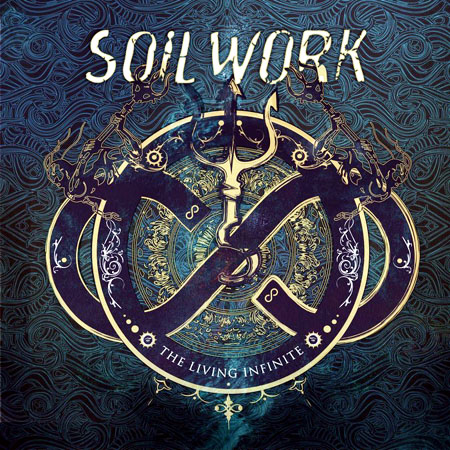 Everybody was talking about Soilwork’s latest album and despite liking the band very much, I was a bit sceptical about such high praises. Now that I finally had the chance to listen to “The Living Infinite” for myself, I must agree with them all. The Swedes really excelled this time and I dare saying that this is their best album so far.

Classy modern metal, combining the finest extreme-meets-catchy, as the first single “Spectrum Of Eternity” had advanced late last year. It’s also the first song on CD #1, with its first twenty seconds of string arrangements (courtesy of Hanna Carlsson) serving as a promising intro. On second twenty-one, the “real” strings of Soilwork kick in at full speed, backing up a drum pattern that would make any black metal band green of envy. Also a long and high-pitched scream will show you that Björn “Speed” Strid is at the top of his vocal performance. The track soon engages into a pace that sets it between metalcore and melodic death metal, and the guitar solo later on will enthral you with its deep melody.

“Memories Confined” slows down a few notches, unfolding a heavy dark vibe, which will totally contrast with the chipper rhythm of “This Momentary Bliss” right afterwards. Diversity – this album definitely has it.

Now “Tongue” is diverse within itself, both musically and vocally. Stridgoes for several tones throughout the song, getting cleaner or rougher just as the beats and licks go slower or faster. And there’s some “eighties feeling” to the guitars near the end that I can’t quite explain, but it gives an exquisite pleasant touch to the whole thing.

The dreamlike keyboards on the title-track, the sharpness of “Let The First Wave Rise”, the easygoing rhythm of “The Windswept Mary”(where New Model Army-Justin Sullivan does backing vocals) and the overall cocktail of melody and aggression are some other features worth mentioning.

And even though one was good enough, Soilwork made it twice as good. Disc #2 kicks off with an ominous instrumental track (“Entering Aeons”) which merges with “Long Live The Misanthrope”, a modern-metal-at-its-best kind of song. ”Drowning In Silence” offers a tempo carousel, the rhythm going up and down all the time, and it’s full of guitar-hero embellishments. “Antidotes In Passing” is the ballad, so they had to compensate by putting one of the fastest songs, “Leech”, right after it. And don’t let “Paradise Blues” fool you with its title, as the song has nothing bluesy about it. “Owls Predict, Oracles Stand Ground”, on the other hand, is just as ominous and doom-ish.