Me and the girls were in front of Debaser doors at 20:00 sharp. Not only we were eager for the evening to start, but there was a freezing wind in Stockholm on that Easter sunday.

I knew there would be a kind of stand-up comedy before, but as I thought the guy was Swedish, I hadn’t high hopes on laughing that much. But Jason Rouse is Canadian! So I did laugh. A lot. The guy has this weird, dark humour, saying thing that we might even think but are afraid to say out loud, even to our friends, afraid that it’s “too much”. Well, he says them loud and clear 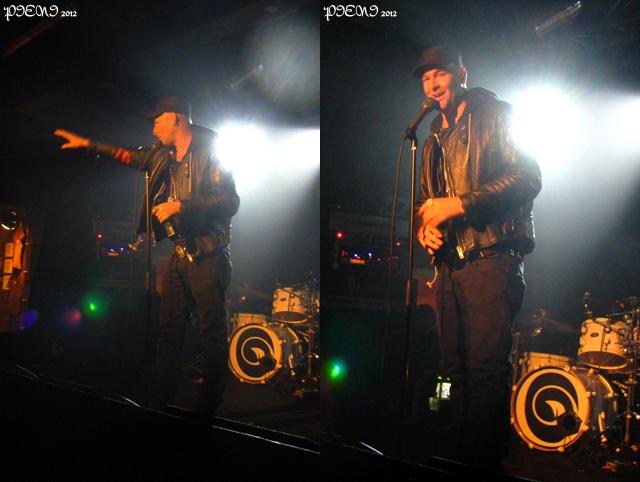 Then came MINORA, “progressive and atmospheric metal from Göteborg”. I wanted to check more about them before, but I had only time to see the video for “A New Dawn”, so I had an idea of what to expect. What I didn’t have a clue of was why they put such a band with a pop/metal/punk one. These guys are good, but most of the audience was there for something completely different – me included. I would have appreciated them a lot more if they were playing with, for example, KATATONIA, as I would be in that kind of mood.

Still, they did very well – despite the bass problems of Djilali Benarradj. And singer Tommie Zetterlund really gives himself to the music – very expressive.

So far they have only one album, “Imago”, but I know they are currently working with Jesper Strömblad for a near-future release. Don’t know if they played some of those new songs that night, sorry.

About the pics… Well, if you’re into silhouettes, you’re probably going to like this. Now if you’re looking for some reference image to recognize the guys on the street…