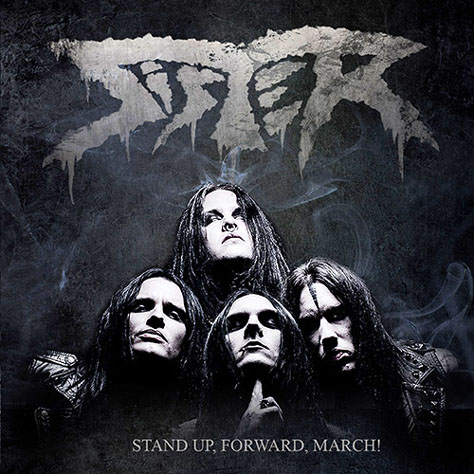 SISTER’s debut “Hated” is a sleaze punk treat. Then for their sophomore “Disguised Vultures” they went heavier and wilder. And now with “Stand Up, Forward, March!”, they stood somewhere in-between, glamming up the sleaze and the wild.

I don’t think it’s a coincidence that this happened after Martin Sweet joined the ranks – after all, he’s responsible for all those juicy guitars in CRASHDÏET. But I don’t want to give him all the credit as the rest of the band has proven their writing skills aren’t raw. Still, once you hear the guitar solos in songs such as “Trail Of Destruction”, “Carry On” or “Endangered Species”, you sense a refinement which you can’t help but associate with Sweet’s work.

The album kicks off with the fiery “Destination Dust” and wraps it up with the joyful “Piece Of Shame” (“I’m too perfect to die” is a hell of a chorus to be sung at any party) – pretty much SISTER style. But they also took a few new things and used them in their own way, like the hints of blues they’ve twisted for “Unbeliever”, the ritualistic chants and melancholy that “Let It Bleed” features, or the somewhat old school goth outline melody – as in THE SISTERS OF MERCY and such – upon which “Liberation Song” was built. And in the end, it all sounded like SISTER just the same.

A metalhead who loves photography and her friends.
View all posts by Pieni →
This entry was posted in CD reviews and tagged glam, metal, Metal Blade, punk, rock, sister, sleaze, Stand Up Forward March, third album. Bookmark the permalink.