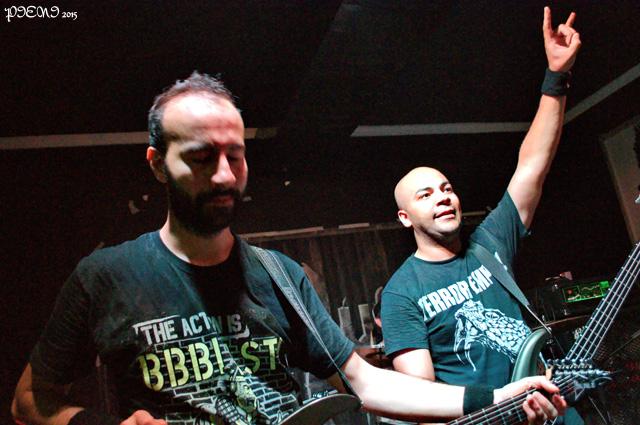 I was at the very first gig of REVOLUTION WITHIN, at Gaia Em Peso 2005, so being there that night, celebrating “A Decade From Within” had a special feeling to it. Two special feelings, actually – even though I’ve been to several gigs of theirs after that, this was the first time I was seeing Katito on bass, who I’ve also known almost as long as REVOLUTION WITHIN. First and last, as this was his last show with the band on national territory (the last date of this mini-tour would be in Spain). There wasn’t any kind of bad blood between them – you can see how genuine his hapiness is on the pics below – but he’s a guitar player, and he’s working hard on his guitar with at least two really amazing artists (not sure how much of a secret that is, so I won’t reveal any names for now).

Along with what are already classics, the band played BLACK SABBATH‘s “Paranoid” (a cover they recorded precisely for this anniversary) and a brand new song called “Without A Reason For Denial”. TERROR EMPIRE-Ricardo went on stage to sing a song with Raça but I can’t remember which, sorry. And I think I fan, who goes by the nickname Mad Butcher, helped singing the last song, “Pure Hate”. I do remember for sure what TALES FOR THE UNSPOKEN-Marco sang, as he was replacing SWITCHTENSE-Hugo, who recorded the original (“Pull The Trigger”). And since Marco curses as much as Hugo…

And as Raça himself. There are even some jokes running around regarding this, and following the old motto “if you can’t beat them, join them”, it was the cursing word “caralho” that Raça asked us to say instead of “cheese”, for the group photo at the end of the show. Memorable!

A metalhead who loves photography and her friends.
View all posts by Pieni →
This entry was posted in Concerts and tagged 10th anniversary, A Decade From Within, Bustos, core, death, HardBar, metal, Revolution Within, thrash. Bookmark the permalink.