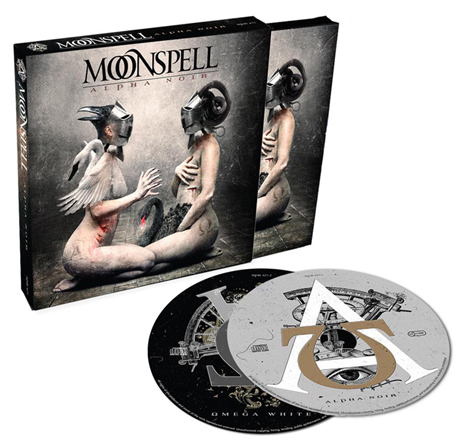 If you look for a definition of “dark metal”, you find zillions of them and so you end up concluding that ALL metal bands are dark, one way or another. But when you hear MOONSPELL’s “Alpha Noir / Omega White”, the obscure essence of its music – not just the lyrical theme – “dark” is a word that automatically comes to your mind and therefore the accurate label, despite the general and vague definition it carries.

The band was formed in 1989 as MORBID GOD, changing their name to MOONSPELL in 1992. Which means that, as MOONSPELL, this year sees their 20th anniversary. So it can’t be a coincidence that this is their first double album of originals to be released, even if it’s just a special edition.

Disc no. 1, “Alpha Noir”, opens with probably the darkest track, “Axis Mundi”: an epic intro that unfolds into an aggressive music and even more aggressive vocals, with a powerfully creepy chorus, as it sounds as a worship chanting.

Epic is also the right word for the last song, “Sine Missione”, an instrumental track that could easily be part of some spooky thriller movie – watch out, Danny Elfman.

In between, “Lickanthrope” stands out for its straight-forwardness, the title-track for its heavy melody and galloping rhythm, and “Em Nome Do Medo” (in the name of fear), for its strong bass line and lyrics totally in Portuguese – something they hadn’t done since the MADREDEUS’ cover “Os Senhores Da Guerra” in 2001, and the original “K (O Mal De Cristo)” in 1999.

Then disc no. 2, “Omega White”, is a lot lighter, justifying the other genre which MOONSPELL is identified with – gothic metal. “White Skies” draws influences from FIELDS OF THE NEPHILIM and goth legends alike. “New Tears Eve” has these seductive keyboards, while the riffs of “Incantatrix” have a touch of modern rock.

The quality behind its composition is clear, although I’m not sure if the old school fans will appreciate this softer side of the band. If not, they can always buy the normal edition, featuring “Alpha Noir” alone.