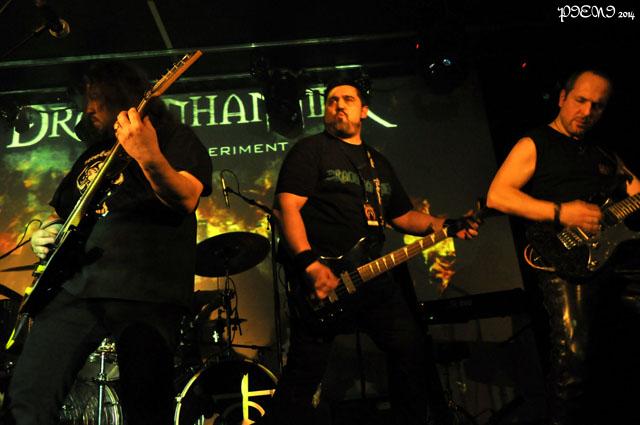 Italian DragonhammeR came next and, unlike me, many knew them well enough. “The X Experiment” was released last December (after a studio break that lasted almost ten years), so they focused a little bit more on that one. But being their first time in Portugal, and having just a 45-minute slot, give or take, they still played three songs from the previous “Time For Expiation” and one – “Dragon Hammer” – from the debut “The Blood Of The Dragon”. They were somewhat somber, only drummer Andrea Gianangeli – the most recent member in the band – matching the vibrant rhythm of their power prog (more power than prog, I must add). But they were smiling in the end – and they had reasons to, given the warm welcome bidden by the crowd – so the serious look on stage was probably just concentration.

The drums in “Seek In The Ice”, the guitar chords of “Believe”, the chorus (sung-along by the audience) of “The X Experiment” and singer/guitarist Max Aguzzi introducing the band before the last song (“Last Solution”) are some of the moments I best recall of the gig.

A metalhead who loves photography and her friends.
View all posts by Pieni →
This entry was posted in Concerts and tagged beyond tour, Dragonhammer, freedom call, power metal, the x experiment. Bookmark the permalink.