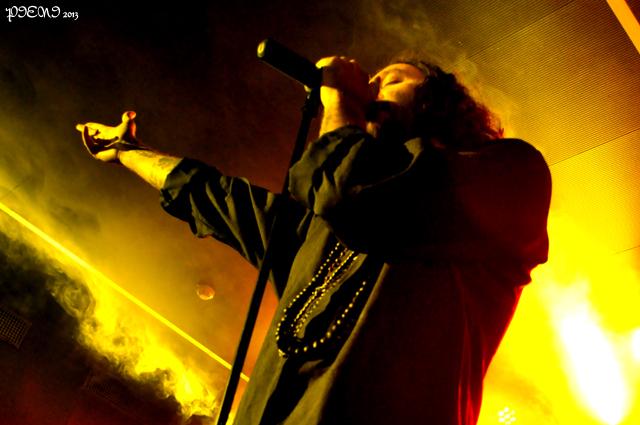 When I reviewed “All Is One” for Sound(/)Zone, I wasn’t particularly impressed by the album. Sure I rated it 7 / 10, but there’s a difference between what I perceive as a good album and what I actually like to listen to. But I’ve seen ORPHANED LAND live before and I was sure the concert would be worth it. And it was.

They started off with “Through Fire And Water” and played a few more songs from “All Is One”, including the title-track and the ballad “Brother”. The crowd loved them, but I don’t think I’m being unfair when I say the level of enthusiasm was a bit higher on the older songs.

Kobi Farhi, bare foot and wearing a simple tunic as it’s been his usual lately, spoke once again against the political and religious discrimination (in fact, he was very literally, saying “fuck that”

) and that people couldn’t be friends just because they had different opinions and beliefs.

On a funnier note, while introducing Matan Shmuely‘s drum solo, he said he would belly dance for us – which he actually did a bit, ha ha – and in the encore, for “Norra el Norra”, in order to  make us sing along the chorus, he started with “I’m Jewish, so let’s make a deal”.

Devy from THE MARS CHRONICLES got on stage to help singing “Our Own Messiah”, and it’s also worth to mention that Yossi Sassi was wearing a THEE ORAKLE‘s t-shirt (the Portuguese band they played with some time ago and whose latest album “Smooth Comforts False” had precisely Yossi as a guest musician).

Oh, and I can’t help myself but to talk about a character who screamed for “Sapari” I don’t know how many times, and when they actually played the song, she only reacted when it was almost half-way played… Also the same character, during a deep moment of the gig where only Kobi was quietly singing, decided to ruin the feeling by making loud noises with her feet on the ground and now that really pissed me off. There’s a line between enjoying yourself, whether drunk or sober, and annoyingly play the joker to be under the spotlight. That character crossed that line big time…

A metalhead who loves photography and her friends.
View all posts by Pieni →
This entry was posted in Concerts and tagged all is one, Israel, oriental metal, orphaned land. Bookmark the permalink.