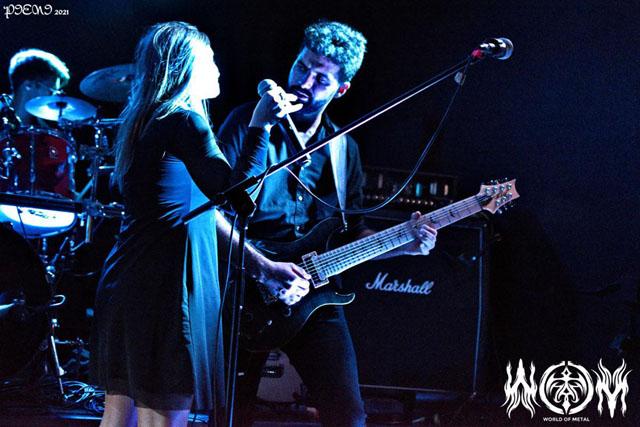 NEEDLE were invited to kick off the evening (yes, evening – this time the gig wasn’t at tea time!), returning to Metalpoint after two years. In fact, until a couple of weeks before, they had been away from any stage for over one year and a half, but given the ease they performed all songs – new and less new (it doesn’t feel right calling “old” to songs released in 2019…) -, no one would tell. And the spontaneity in Soraia Silva‘s gait, underlining the melodic steadiness of her voice, gives a whole new life to the progressive metal brought to us by this Guimarães act.

From what I’ve read, “Fall” should be out this year still, and even not playing the latest single “Warden” (I strongly advise you to listen to it and watch the video), among the novelties it was “Castles” which caught my attention the most. They saved “Freedom” for last, that Soraia introduced as “everybody knows this one, right?”. Someone at the back confessed not and so the singer dedicated it to that gentleman. In the end, she made sure to ask him if he had liked it and to rate it between 1 and 5. His hands shaping a heart was the reply.

A metalhead who loves photography and her friends.
View all posts by Pieni →
This entry was posted in Concerts and tagged Aurora release party, metalpoint, progressive metal, Secret Chord, WOM, World Of Metal. Bookmark the permalink.