I don’t like RECKLESS LOVE. True, I wrote highly about “Spirit” (read review here), but only because I was able to stand on their fans’ shoes, meaning I knew that album was what they would expect and appreciate. And even though I like glam & sleaze bands, RECKLESS LOVE have always sounded… too cheesy for me. So the fact that I absolutely loved their show was a shocking surprise.

They’re still promoting the aforementioned “Spirit”, so I recognized most of the songs… and found myself swinging to their rhythm! You know how some bands are meant for the stage, not the studio? Wasn’t expecting that from a glam band, but that’s what happened – the songs sounded so more alive! As soon as I got home I listened to the CD again and no, I wasn’t wrong the first time. There was still something missing in there – something that was oh so present in the show.

And Olli Herman is quite an entertainer, knowing exactly how to draw you in. I’d seen him with CRASHDÏET in 2008 and he’d already hinted it back then, but he’s using that skill much better now. The same with his vocal chords! I still remembered, 6 years later, how his uncontrolled high pitch had pierced my ears (“taste the falling rAAAAAAAAAin”). But now he’s right on it.

Kicking off with “I Love Heavy Metal” and wrapping it up with “Hot”, in-between we heard (and sang) songs such “So Happy I Could Die”, “Bad Lovin'”, the beautiful ballad “Edge Of Our Dreams” (dedicated to us, since it’s a song about being on the road and we are the ones who make it possible), “Back To Paradise”, “Sex, Drugs & Reckless Love”, “Born To Break Your Heart”… and almost every one was introduced by having its title included in a matter-of-fact sentence. On “Dance”, Olli also started to shake his ass in a very seductive way, and closer to the he just told us to feel the groove of Maxx‘s tribal drums, “tribal” giving immediately away that the song would be “Night On Fire”.

So I still won’t listen to their work on my stereo (except for “Edge Of Our Dreams”, which I’ve been doing since the first time I’ve heard it anyway – I’m a sucker for a good ballad) but if I have the chance to see RECKLESS LOVE live again, I’m there!

Smile for the camera, Madrid! 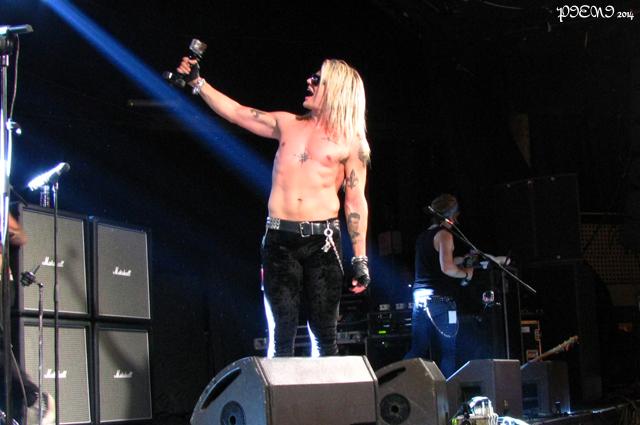 A metalhead who loves photography and her friends.
View all posts by Pieni →
This entry was posted in Concerts and tagged flamboyant, glam, Gotthard tour, la riviera, madrid, Reckless Love, rock, sleaze, spirit. Bookmark the permalink.