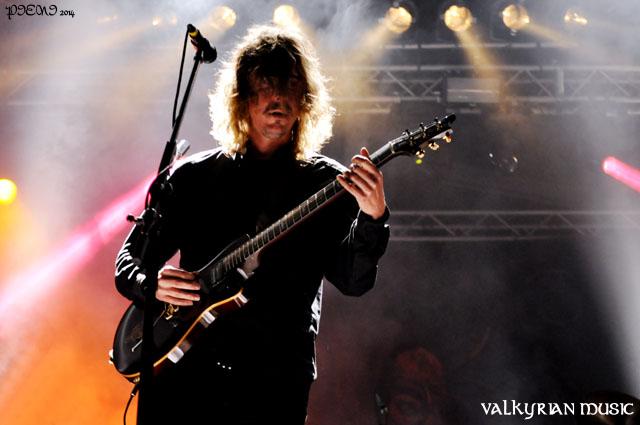 Now OPETH… I’ll start with something Mikael Åkerfeldt said at some point, regarding a song I honestly can’t remember the name, but he said that “if it sounds like a fuck-up, it isn’t. It’s just us being progressive”. And this is more or less what I think of prog. Nope, it’s definitely not my cup of tea. I recognize the high quality of some of the bands/artists, but I just can’t like it. So me, and many others like me, wouldn’t have enjoyed the show (apart from Åkerfeldt’s jokes, that is). The thing is that even among the die-hard OPETH fans there are mixed feelings about the Vagos show. Some complained about the “soft” setlist, others about the somewhat shallow performance… and then there are those who were simply enthralled from the moment “The Devil’s Orchard” started to the one where “Blackwater Park” stopped. They have played VOA two years ago, and I’ve also seen them at the 9th (and last) anniversary show of the original Hard Club, and this was the weakest of those three. But like I said, prog isn’t my thing, so I could be wrong… I still laughed when he said they came from Stockholm, where other great metal bands came from, like ENTOMBED, DISMEMBER, BATHORY… and ABBA. That the next song was actually “Super Trouper” (it was “Heir Apparent”). Or when he said it smelled like dead cat in his armpit. Or when he told a girl she could lower the “teddy-crocodile” as he didn’t know that song (it was a dinosaur plushie with a sign asking for “Coil”). Still there was something missing in his attitude – even I noticed that. Was it a bad concert? No, I can’t say that. But OPETH can do better.

Yoshi the dinossaur (not crocodile):

A metalhead who loves photography and her friends.
View all posts by Pieni →
This entry was posted in Concerts and tagged Opeth, Portuguese festival, Prime Artists, prog, progressive, summer festivals, Vagos, VOA. Bookmark the permalink.