HARDCORE SUPERSTAR’s “C’mon Take On Me” 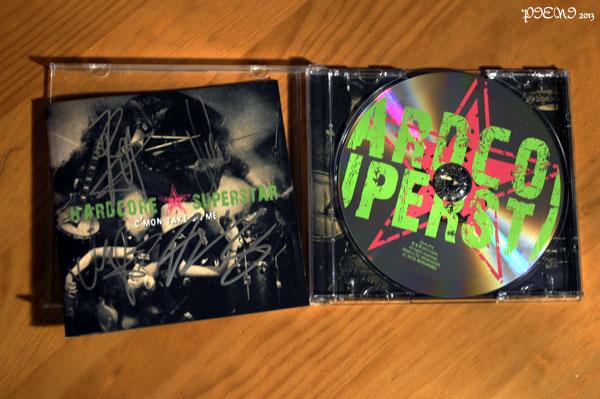 When Hardcore Superstar released a best-of compilation (“The Party Ain’t Over ‘Til We Say So”) a couple of years ago with no particular reason, like an anniversary or something like that, I thought the band would take a break and the intermission between “Split Your Lip”(2010) and its follow-up would be longer than usual. I’m glad I was wrong.

“Cutting The Slack” is probably the weirdest intro in the HCSS history. The first few seconds make you feel like you’re about to witness some scene from a fantasy movie, sounding as an epic soundtrack (and yeah, well, it WAS written by Swedish soundtrack composer Anders Ehlin). But then the mystique is soon replaced by some kind of fairground music, although it’s rather creepy than actually cheerful.

The cheer kicks in right afterwards with the title track, where you can hear all the band’s trademarks – the fast, sharp drum sequences, the vibrant guitar licks, the happy catchy chorus… Which doesn’t mean that they’re repeating themselves. They’ve come up with this unique formula back in 2005, resulting in something too heavy for any kind of rock, and yet too sleazy for your average metal band. Street metal is what they call it, and they do it in such a way that you feel that characteristic essence, you recognize it as an HCSS song, but you don’t think it sounds the same as any previous song. It will sound fresh and new, but familiar at the same time.

“One More Minute” is another bright example, probably brightest, and hence the choice for the first single. Heaviness mixed with loose melody, spiked up with a very sing-along chorus and you have here one of the most earlicious cocktails of the album.

A more rocking track follows suit, with more guitar embellishments, showing a more easy-going side of Hardcore Superstar – so “Above The Law” was the obvious second single.

“Are You Gonna Cry Now” raises the bar as it gets harsher in the heavy parts and quite sensual in the smooth ones. And speaking of smoothness, an acoustic bluesy “Stranger Of Mine” sends out a relaxation vibe, the same kind of vibe of Guns N’ Roses’ “You Ain’t The First”.

Then comes a bunch of sleaze rock songs, each one with a riff or a hook or a solo that make them all worthwhile. Must add that part 2 of “Won’t Take The Blame” is just an extension of the first, as if the band got carried away and just kept playing the chorus in party mode.

The final track is anything but party, though. “Long Time No See” is a beautifully sad song, a ballad with a whiff of Aerosmith in the main chords and lots of emotion through and through.

Two whole months into 2013 and I’m pretty sure already that “C’mon Take On Me” will be featured in my yearly best-of.

4 Responses to HARDCORE SUPERSTAR’s “C’mon Take On Me”