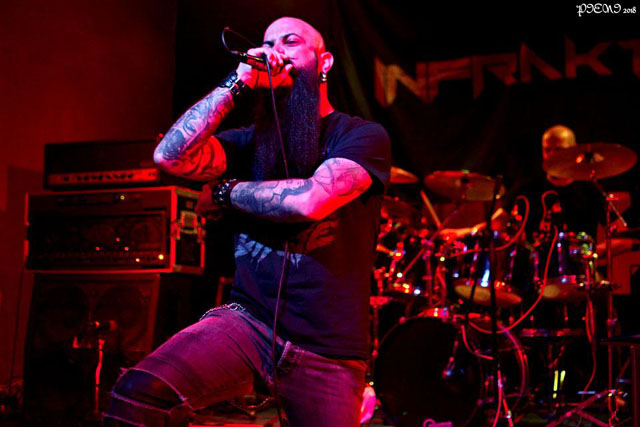 INFRAKTOR returning to D.R.A.C. in Figueira da Foz, this time for another edition of Warfest (my first, to be honest).

Mike was, quoting Popas, “serving the country” (he works in the army) and therefore the band performed as a 4-piece. Before Mike joined INFRAKTOR, they’d played one gig in this format as well (see here), and for a bass-lover as me, it hurt a bit. But the “ferocious intent” (pun obviously intended) they all hit the stage with, the ride was more than worth it. And before you ask, backtracks are not an option with these guys; nothing to do with old-school concepts but they’re simply too spontaneous to perform 100% alike what’s recorded, hence making it impossible for a backtrack to fit (or rather for them to fit a backtrack…

). Mike was missed, but it was still a hell of a show.

A metalhead who loves photography and her friends.
View all posts by Pieni →
This entry was posted in Concerts and tagged D.R.A.C., death, ferocious metal, Figueira da Foz, Infraktor, thrash, Warfest. Bookmark the permalink.