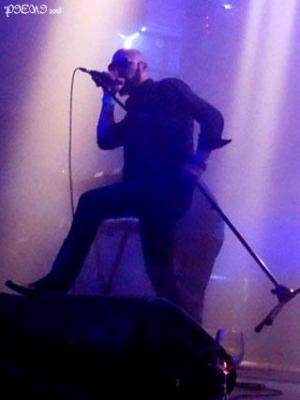 BAL ONIRIQUE is such an underground goth band that you can barely find anything about them online. They’ve been around for over a decade – there’s the release of a single, “Jadis et Naguère”, dating back from 2007 – but even sharing the same hometown, I’d never heard of them until they opened for FIELDS OF THE NEPHILIM. I liked what I saw/heard. Pretty old school, fitting right in what one would expect in such an event. “Slow Lane” and “Lovers Suicide” seem to be quite popular among those who know them, but I honestly can’t tell for sure ifthose were part of their setlist that night.

Does it really matter that FIELDS OF THE NEPHILIM newest material is just the single “Prophecy”, already two years old, after the release of “Mourning Sun” in 2005? If your answer’s “yes”, you clearly don’t know what you’re talking about. “Moonchild”, “Love Under Will”, “Psychonaut”, “Last Exit For The Lost”… I’m all about moving forward but some bands/songs/postures are simply timeless; Carl McCoy‘s baby is one of those.

Some silhouettes are unmistakable:

A metalhead who loves photography and her friends.
View all posts by Pieni →
This entry was posted in Concerts and tagged At The Rollercoaster, Bal Onirique, Fields Of The Nephilim, goth, gothic rock, hard club, Porto, silhouettes. Bookmark the permalink.