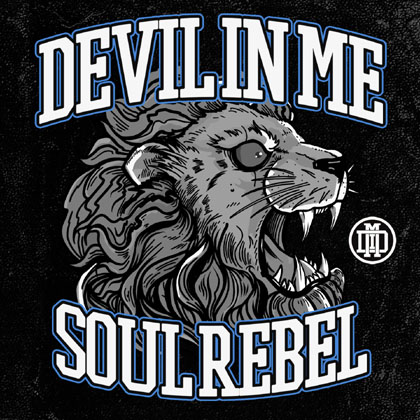 Rumor has it that “Soul Rebel” is one of the most expected albums in the European hardcore scene. Whether that’s true or just publicist talk, this piece will certainly make big waves. And not just among the hardcore fans – “Soul Rebel” is more accurately described as a crossover album, so it has a lot of tweaks prone to thrill a fair share of the metal community as well. Like those thrash-oriented riffs in “Break The Chain” or “Blood & Rage”, for instance – the latter including a guitar solo just as juicy. But even the hardcore-anthem-material of the title-track, “Monster” or “Warriors” has something about it that will make people outside the hardcore sphere want to shout along those gang vocals, if not the choruses or the whole songs. That’s what makes DEVIL IN ME stand out from the rest of their fellow bands – the ability of turning their rough and brisk sound into a catchy earworm.

And no matter how top-notch the work of a musician may be, special guests are always a treat. Poli’s voice is quite unique, raspy and full of the rebellious attitude that both lyrics and music of DIM bear, but getting Freddy Cricien from MADBALL to add some vocal power to the aforementioned “Warriors” is a sweet cherry on top of the icing.“Monster” is a DIM-meets-BIOHAZARD blast of a thing, as singer Billy Graziadei, guitarist Bobby Hambel and bassist/singer Scott Roberts give their straightforward input in it. And a not-so-popular name but in no way less talented is Orlando Santana, from the also Portuguese ATLÂNTIDA ON DEMAND, who helps Poli with “SYG” (stand your ground).

That being said, this is then a thick, well-woven album, comprised of eleven defiant and spirited songs, aimed at open-minded but strong-willed people. Soul rebels. Like lions.

A metalhead who loves photography and her friends.
View all posts by Pieni →
This entry was posted in CD reviews, Other and tagged Atlântida On Demand, Biohazard, crossover, devil in me, DIM, hardcore, Impericon Records, Madball, soul rebel. Bookmark the permalink.