It took me some time to buy the ticket for the FIVE FINGER DEATH PUNCH gig at The Forum as I was waiting for the date of another gig. By the time I learnt the latter wouldn’t interfere with my trip to London, the standing tickets were already sold out.

No freaking way I would see 5FDP from a balcony, on a seat! And apparently there were more people thinking like that (as I don’t believe my lucky stars would shine that brightly) ’cause the band booked a second show at the same venue for the following day.

The first one eventually sold out – balcony seats and everything. If the second one, the one that I attended, didn’t followed suit, it was pretty damn close. I guess there’s a reason for the flight mentioned in “Battle Born” to be leaving Las Vegas towards London.

POP EVIL was nice. The Michigan band delivers a quite vibrant rock to which you can’t stay indifferent – although it was somewhat misplaced in that bill. Focusing mostly on their latest third studio album, “Onyx”, they were warmly received by the crowd – as the night before, according to singer Leigh Kakaty, who heartily expressed his/their gratitude for such a support to “a band they didn’t know about”.

UPON A BURNING BODY. Deathcore. From Texas. That alone tells you the level of brutality…

Not my cup of tea, but I have to admit these guys are good, real good. And the three-piece-suit outfit? Brilliant! Singer Dany Leal kept everybody moving – meaning moshing or simply headbanging -, jumping and clapping their hands. And if their Latino look wasn’t any hint, the mariachi licks they entwine with their ‘core sound here and there would certainly tell you about their Mexican heritage. And of course the songtitles “Desperado”, “Once Upon A Time In Mexico” or “El Mariachi”… The outcome is pretty exquisite, exotic even, and therefore special.

Chris Kael (bass player in 5FDP) went on stage to sing backing vocals on a song, but I honestly don’t know which one. The obvious guess would be “Sin City” (you know, Las Vegas, 5FDP hometown?) but that was the last song of the set and Kael joined them before. So maybe it was “Texas Blood Money”, but I can’t tell for sure.

If I were a deathcore girl, these guys would be in my top-5 bands. 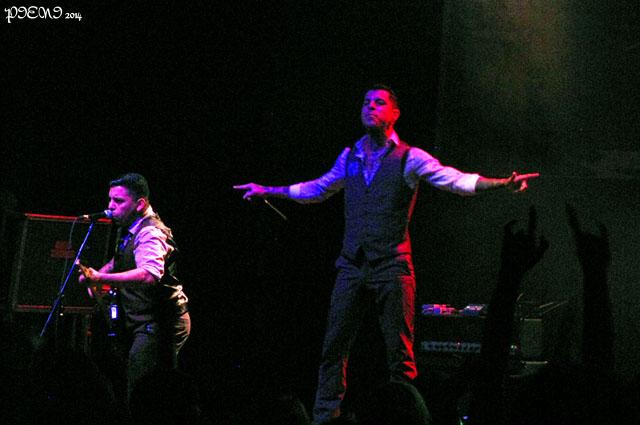 The lights were out while NAPOLEON XIV‘s “They’re Coming To Take Me Away, Ha-Haaa!” played and the crowd clapped to its rhythm. Even if you couldn’t see them in the dark, you knew that closer to the end of the song FIVE FINGER DEATH PUNCH came on stage as those with better night vision screamed their lungs out. And then the place lit up  at the same time “Under And Over It” kicked off and Ivan Moody spat water in the air, just like he does in the videoclip. And all hell broke loose. What stage beasts these guys are! Of course I already knew that, after the gig last November in Lisbon, But still I got that WOW feeling that only certain bands are able to stir inside you.

And then the high spirits. I think it was before “Lift Me Up” that Ivan told the audience that “these guys (pointing to the security) aren’t your enemy. They’re here to pull you and your girlfriend up so your ass won’t hit the ground” or something like that. So they made us scream real loud “Thank you, security!” before adding “Having said that, are you ready to go stupid?”

Then he said he’d been walking around town and saw someone selling fake 5FDP merch (to which people booed). I’d seen a fair share of people wearing those shirts, actually. The front had the logo of the band and the words “fuck pop” and in the back said “let’s rock”. “Really, you’d think I’d put that on a t-shirt?”. So he bought them and now threw them away into the crowd. And warned some guy “sorry, man, that’s a girlie”.

For “Burn MF” he pulled up on stage a bunch of girls from the audience to help him sing the chorus. Of course everyone did that, on and off stage, and in every single song. But it’s always different to have fans doing it up there, close to them, reminding you that despite their rockstar status, they’re still down-to-earth.

And before L.L. Cool J‘s “Mama Said Knock You Out”, we were told that cover had come around because Zoltán Bathory was a huge fan of WWE.

There were also the emotional moment of “Remembering Everything” (preceeded by the intro “The Agony Of Regret”) where Ivan had only Jason Hook with an acoustic guitar backing him up. Musically, that is. Vocally, as aforementioned, he had the whole venue. Every time he shut up and let us sing by ourselves, it would bring shivers down my spine.

“Battle Born” also started out acoustically, but eventually the rest of the band came back on stage and joined in. Ivan changed the lyrics from “I don’t know where I’m going but I sure know where I’ve been” to “… but God knows where I’ve been”. Since he admitted not too long ago that there was a time where he was so drunk that he couldn’t even remembering being on stage, that’s probably more accurately (as long as you believe in God, that is…).

In the end, as it’s been their usual for some time now, the first verse and chorus of “Far From Home” was the let’s-see-what-you’ve-got challenge, which we aced, and “The Bleeding” wrapped it up. During the bows, thank-yous with taps over the heart and distribution of picks, setlists and drum sticks, “House Of The Rising Sun” echoed through The Forum.

Those two shows were filmed to put up a live DVD. That’s surely a must-have, not just because I was in one of them, but because live footage of FIVE FINGER DEATH PUNCH is definitely a great way of spending your free time at home. 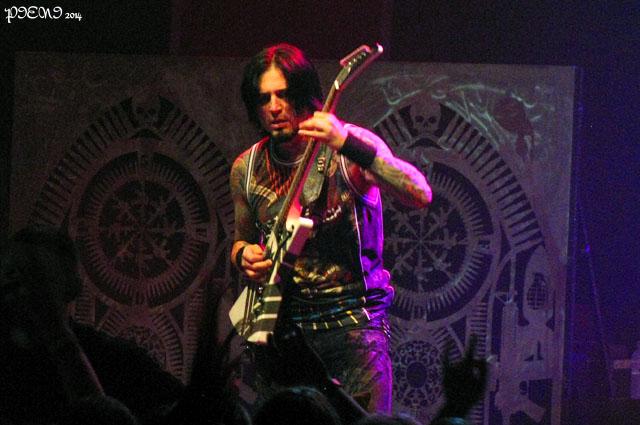 A metalhead who loves photography and her friends.
View all posts by Pieni →
This entry was posted in Concerts and tagged 5FDP, Five Finger Death Punch, HMV Forum, Kentish Town, London, Pop Evil, The Forum, Upon A Burning Body. Bookmark the permalink.