Nando was sick, and despite all the teas spiked with honey, his voice wasn’t very clear in the beginning. He asked the crowd to help him out singing – which they were more than glad to do – but after a couple of songs his voice got better! Not 100%, of course, but good enough to be loud and perceptible. Guess metal is the cure indeed.

They’ve only played two songs from “World Wild Web” – the two last, “If Only There Was Light” and “Reflections” – the rest of the set belonging to “Deviance”. Which makes all sense, being their latest release and the songs sounding more well-structured, stronger… better.

More or less in the middle – during “(In)Sanity”, if I’m not mistaken – Nando was taken by the force of habit and said “Let’s go Metalpoint!” instead of Hard Club, right on the moment that one string of Filipe‘s guitar broke and they stopped playing almost immediately. It even seemed that it was a practiced and premeditated act.

The solution was replacing Filipe‘s guitar by Victor‘s old 7-string BC Rich Mockingbird, which seems to be the heaviest guitar ever – and I don’t mean the sound. Nando joked that even though Filipe is a doctor, he wouldn’t avoid getting a pain in his back. It’s quite an exaggeration, but Victor is actually selling it, because he says he’s too old to endure that weight. So if you’re interested, visit his facebook and send him a message about it.

In the end, Nando couldn’t possible think he was at Metalpoint, as a stage invasion is practically impossible there, given the small size of the other venue’s stage. Awesome show, despite everything. As usual.

Nando was forced to crowdsurf, after EQUALEFT-Miguel gently pushed him off stage: 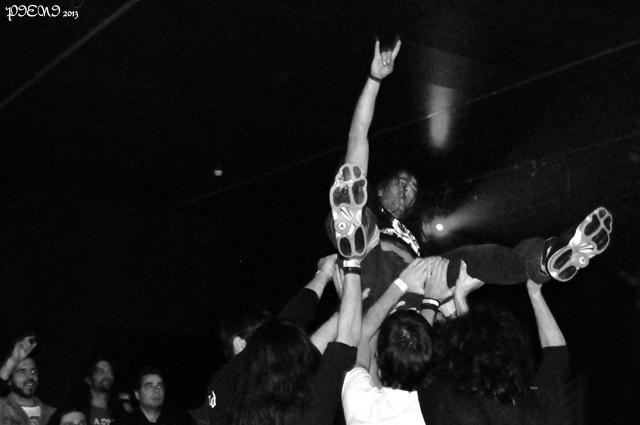